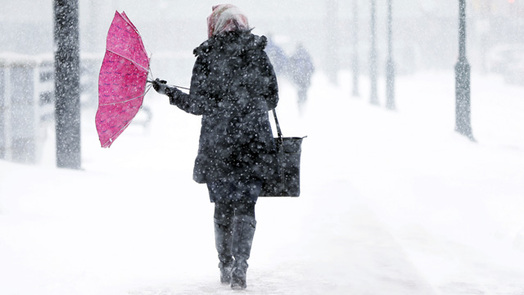 On a lonely road on a snowing day
Hardly people thought it would snow on Tuesday one week before the day. But two days to the day, forecasts suddenly manifested snowfall. The day turned out another massive snowfall with horrible experience on the roads, and people had to live with bitter cold.
News reports showed that it was another snow day of trouble; people were either caught struggling to get home from work or having to wade through the enormous snow accumulation to get back home or work.
Train stations were packed and buses filled to the brim being the major means of transportation with taxis and cars off the road. Flights in and out of major airports in the tri-State area were cancelled. Passengers from flights that managed to land faced long waiting in the aircrafts before allowed to walk out to confront a bleak hope of going home. There were no taxis and unregistered taxi operators seized the opportunity to make quick profits.
As early as 0800am, a man in New York whose wife had a flight from Atlanta to New York City called Delta Airline to know if the flight had been cancelled or not. He was shocked to hear that the flight would be on time. He still could not believe that the flight was not cancelled when he called the airline again at about 1700hrs and the flight was confirmed as still on time. It meant that he had to find a way to get to the John F. Kennedy Airport to welcome his wife. He decided to see how far could travel on public bus since he had ruled out driving in the snow covered streets to the airport. He thought it was a mad and stupid decision to step out and go to the airport under the condition on the streets.
But he thought it would be madder to leave his wife stranded at the airport and reluctantly stepped out at 1710hrs on a journey that became the most traumatic he had experienced. He found himself stranded at a bus station along twice in the deadly cold, first at Hegeman for about one and a half hour and later at Linden close to the airport for thirty minutes.
The journey from his home in Flatbush area of Brooklyn was not as difficult with the larger than life presence of B35 buses that ameliorated the suffering that people would have encountered. At the bus stations, people entered filled buses from the front and back doors. But getting either the B15 bus from Hegeman going to JFK or Linden was herculean. It prompted people jumping into a B15 bus going to Linden than waiting for the one heading to JFK. He said that despite the snowing,it would not be difficult for aircrafts to land, because there are lots of men and equipment at clearing the snow off the runway.
Waiting the minutes for a B15 bus to the JFK was more harrowing than the one hour and a half hour waiting at Hegeman, because the open park at Linden gave more effect to the wind than the close areas at Hegeman, where a man whose age must have been around over 70 lament his decision on the street at that hour on his way to work. He could not wait for the never coming B15 bus. He abandoned the journey and returned home. He said the only time he had regretted ever experiencing winter was a brief stay at Buffalo. He said it was the extreme cold in Buffalo that led to his decision to move to Brooklyn and he imagined what people in Buffalo would be experiencing as he watched people in the bus station at Hegeman shivered in the cold while it snowed.
Eventually, a bus to the airport arrived. Passengers alighting from the bus to continue their journey in an air train at the first stop at the airport were disappointed as the air train had been shut. But a bus waited at the other side of the train station that conveyed people to all the terminals. Arrival at the airport showed that the flight he was going to await had arrived on time. But the waiting for the passenger took a long time. About an hour after the flights arrival, people wow waited to welcome their loved one were told to move from terminal 2 to terminal 4, because the aircraft had been directed to off load its passengers away from terminal 2 - its first choice - due to snow accumulation and insufficient space to park. For an aircraft that had arrived at 1957hrs, the passengers began stepping out at about 2230hrs.
The arrivals have choice to sleep by finding somewhere and lay on the baggage until the miracle of getting a taxi will happen or accept a ride from private taxi operators making quick profits charging between $75.00 - $85.00 for a trip that will normally cost $45.00, and with a deluge on a long queue for few available registered taxis.
The couple arrived home and discovered the house was as cold as outside. They wrapped themselves in blanket and bedspread after a phone call and text message to the building's super hit the walls. The following morning, the man went downstairs and was welcomed by a notice pasted on the lobby door. "The boiler had been damaged and the super was waiting for the repair man." According to the super, the excess cold had solidified the oil in the boiler's pipe, making it impossible to deliver heat and the residents left in the cold.
HTML Comment Box is loading comments...
NEWS AND FEATURES
News & Features Around The World