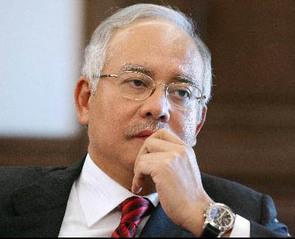 Najib Razak
Malaysian prime minister, Najib Razak, has created a debate with his premature closure in the matter of the missing Malaysian aircraft and its 239 passengers. The debate is two pronged: Was the prime minister right in his assertion that the MH370 ended its journey in the Southern Indian Ocean and all its passengers perished with it?  Was his announcement without waiting for confirmation or otherwise of debris found as that of the aircraft premature or not?
The immediate reaction of family members of passengers in the ill-fated aircraft was that they disbelief the prime minister's assertion and that they needed to hear more from him. General public discussion points to saying that the prime minster has widened the suspicion in the matter the missing aircraft and passengers rather than achieving a closure.
The Malaysian minister of transportation, Hishammuddin Hussein, has been working strenuously to convince the public and buttress the prime minister's position. According to him, about 21 different debris have been sighted in the Southern Indian Ocean and some of them he said were shinning metals.
The prime minster's assertion was that the aircraft had crashed and the passengers perished with it, using debris sighted by satellite in the Southern Indian Ocean to support his belief. The question his assertion raised was later indirectly answered by the Australian government's statement that an effort was being made to retrieve one of the debris sighted on the satellite for examination. This is later followed by another statement that there has been no scientific proof that the debris belong to the missing aircraft.
Many people are today asking a question about why did the Malaysian prime minister think that he can assail the world with his own opinion and expects the family members of the passengers to accept his opinion as final? Another set of people are saying that the prime ministers's act shows him as living in the past and not the present. They say that the prime minister has tried to manipulate a procedure and the result is the boomerang.
A professor at a New York university asked his students about the prime minister's position and whether they thought it was premature or not. All the students said the prime minister's action was premature on the basis of making a far reaching announcement on a non-conclusive investigation.
Although, people are saying that it is possible the aircraft may have crashed and all the passengers with it, but that there is not yet a valid proof. And many people think the same lack of proof informs the prime minister's position the first week of the aircraft's disappearance when, he advises against speculations that the aircraft may have crashed. What then suddenly informed his turn around to seemingly ludicrous declaration that makes him look like someone in need of a psychiatric examination?
Some people say he wants a closure, because he may have thought he is helping family members of the passengers, and that he has therefore allowed emotion to take the better part of him.
They say when an aircraft has disappeared for two weeks with no traces and no twitter or any communication from any of the passengers on board of the aircraft, it is easy to assume the worst may have happened. But then, they say procedure should still observed in determining whether debris sighted by satellite belong to the aircraft or not.
Widget is loading comments...
NEWS AND FEATURES
News & Features Around The World