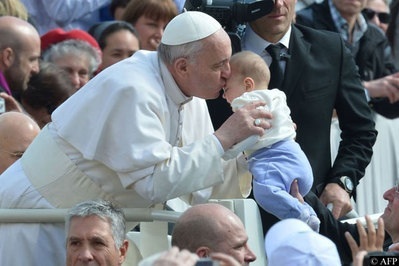 Pope Francis' evangelism train is still in the United States, but in Philadelphia, after an impactful of activities in the Big Apple and Washington, which memories will take quite a long time to forget. The pope's visit says much about the role of evangelism in religion, winning souls, healing the infirm - a procedure that has since become a natural way for Christians to show how much they care. It was how Jesus began his ministry - healing the sick, waking the dead, feeding the hungry and telling the authorities the undeniable truth.
The only difference between Jesus Christ and modern day Church leaders like the pope is that miracles are no longer as numerous as they were in Christ's day and days immediately after his resurrection. Christ was an embodiment of miracle works. His resurrection was also a miracle, which no other human can imitate. Not even the apostles's acts immediately after the resurrection that began on the Pentecost can compare with Christ days.
But nonetheless, the Acts of the Apostles left something dramatic following after Christ's feeding of the multitude. It is about the procedure in which everyone donated their belongings and earnings and everything belonged to everyone without anyone personally laying claim to anything. A sort of Utopian approach, a society without confusion and inequality; no war of maddening acquisition, the thought about Kings going to war to expand territories and slaves and careless of the negative effect on the people. There were no millionaires or have not, since they were all equal. It was a society different from the one around it. It probably was the type of society Christ wanted and which he preached and one that brought him into trouble with the Roman leaders. The extension of the gospel to the Gentiles through Paul may have have made the society too big for effective management. Consequently, the emergence of all sorts of believers , who did not belong to the fold, but nonetheless began to perform miracles in the name of Jesus. It is also not surprising that all  kinds of reports about sexual misconducts began to emanate among Fathers in Rome, a development which eventually led to the first schism in the Church  led by Martin Luther, the founder of the Lutheran Church.
Pope Francis' speech all the time in New York against inequality, man inhumanity to man and the need for accommodation of among ourselves,s all point to a style of evangelism linked to the days of Christ. The most poignantly manifest among sermon is Francis's demonstration of humility and lack of love for material wealth. He rides in small cars, instead of big and opulent one. He visits the homeless and the prisoners. He frowns against conflicts that are negatively impacting humanity.
But for everyday Church goers, nothing may be new in Francis' talk. However, for atheists who don't go to the Church and are hearing such sermons for the first time on the street, Francis was talking about something new. This explains the power of evangelism. It is about talking of what Gid wants us to do to have a desirable community of human beings. It was why Christ and the early apostles were mostly on the street preaching the gospel, because not everybody go to the Church. I
Pope Francis' evangelism, which he has also taken to Cuba before coming to the U.S, is a practically demonstration of the need for human communities to live in peace and love for one another,  with efforts leading to rekindling of diplomatic relations between the U.S and Cuba. Francis evangelism and sermons from him will also make one ask whether there ever would a world, where the rich would surrender their wealth for the comfort of all. Would there ever be Utopian society that would take care of the needs of all, irrespective of status
NEWS AND FEATURES
News & Features Around The World