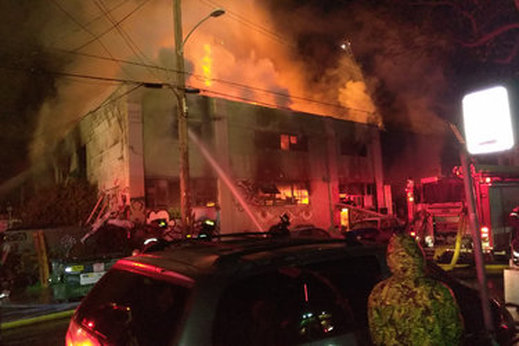 36 people were confirmed dead on Monday in Oakland warehouse fire in California.
The revelation comes as search continues over the weekend, based on a list of people yet to be seen after rescuers have recovered about nine people from accessible areas of the building, according to news reports, based on family and friends searches.
The last words may not have heard about the number of casualties in the fire, as officials said that the search for bodies will continue. Meanwhile, parts of the building near the roof is said to be no go area for fire fighters.
The New York Times has described the incident as the deadliest structure fire in the country, in the past decade. The Times' report says  that the two story building that was coverted into a warehouse was covered by thick black fumes on Friday night, oozing from windows and confirmed by eye witnesses, who were spectators.
There is an unconfirmed possibility that the fire safety regulations may have been compromised in the conversion of the building to a warehouse, leading to difficulties by many of occupants of the building caught in the inferno from escaping the deadly fire. The Times report says that the exits were complicated and that there were two temporary wooden staircases to the first two floors.
Oakland officials' report shows that bodies of the nine people were recovered from parts of the building accessible to first responders. There are parts of the building, which resuers have not accessed, raising fears that there may be truth in the claim by friends and family members of more casualities than already known.