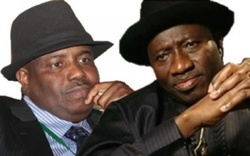 Tambuwal and Jonathan
In three days, the world will know the direction politics in Nigeria will go, in the battle between the ruling party, PDP, and the opposition party, APC, following defection of the speaker of the House of Representatives, Aminu Tambuwal, from the PDP to the APC, two weeks ago.
Consequent to his defection, the police inspector General withdrew his security details. Members of the opposition cried foul, and accused the presidency of a plan to remove the speaker from office.
Politicians in the ruling party said the speaker has abandoned his office by defecting when there is no division or split in the party on which he got elected into the house. Members of the opposition takes that to mean that the ruling party is interpreting the constitution and views the police inspector general's withdrawal of the speaker's security detail as an act of obedience to an instruction from the presidency.
The speaker and the APC have gone to court challenging the presidency, the ruling party and some of the party's top officials, as having a plan to remove the speaker from office following his defection. The court granted their request asking all parties in the case to maintain the status quo until its judgment on Friday.
With the court's pronouncement,bop position members are saying the PDP has been unable to reconvene the house reliably shut last Tuesday by the speaker before his defection. Opposition members are saying only the speaker has power to shut and reconvene the house, and that no other organ of government can do it outside the speaker. And so the speaker is free to play politics with the House toward achieving his own personal political goals. This has led to questions about what Tambuwal aims at achieving by causing upheaval in the ruling party to embrace the opposition, because observers  say they cannot see him supplanting Muhammed Buhari or any of the other aspiring presidential candidates in the opposition to become a presidential candidate. They say unless the party decides to forsake Buhari by choosing a presidential candidate from the South and then makes Tambuwal a vice presidential candidate from the north.
The speaker now goes about without security. He uses  members of his new party in the house as shield around him. News reports said he arrived to address a session at the legislative building on Friday driving himself in his Range Rover car, and was shielded by members of his new party against possible attack.
Observers have described the mass defection beginning few months ago as politicians' readiness to reap from the failure of the ruling party in the next election, believing that power will pass to the opposition, based on a calculation that Boko-Haram has completed a change of power waiting to be formalized through an election.
The ruling party has approved the incumbent president as its sole candidate for the presidential election, while the opposition has about five notable candidates, despite some members' approval of former military president, Muhammed Buhari as their favorite, because they believe that his party's hope is hinged on his popular support apart from the trouble Boko Haram has caused the ruling party.
NEWS AND FEATURES
News & Features Around The World