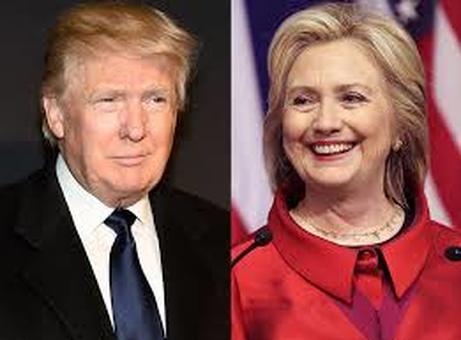 Donald trump and Hillary Clinton
I was one among many Americans, who found no time to watch the presidential debate, between Donald Trump and Hillary Clinton, Monday night. Despite my inability to sit before a television set to watch the debate, I followed developement on my cell phone.
By the time the debate ended, I tried to get the results from major newspapers online editions, as early as 11:55 pm, but none offered a clue.
The New York Times or the Washington Post did not have any report to show that Trump or Hillary may have been knocked out. However, a statement about a fiery encounter showed the game did not go the way of Trump's adversaries. .
My search, up to early Tuesday morning,did not yield any result. I concluded that if the New York Times or the Washington Post had no report about Trump's getting knocked out by Clinton, it meant that Trump may have escaped the political guillotine, against the expectation of his opponents and a section of the media.
A report in the Fox News that the media united in declaring Clinton the winner and that an online polls show that Trump has been declared the winner show the trend about about a battle between the media and the voters over who should be president after President Barack Obama's departure from the White House or the candidate that Obama will engage in the handing over ceremony.
Some guys in the Fox News also had expected that Trump would have taken Clinton out and because he did not, a question was put to his campaign manager about why Trump failed to do that early Tuesday morning.
The liberal media wanted Clinton to nail Trump before the debate, for the debate to be a mere formality. The Conservative media wanted Trump to end Clinton's aspiration right there at debate venue. Showing the division in the media along political lines and that some or many journalists cannot hide their political leaning or their warped sense of patriotism.
Liberals in the Democratic Party and the media are worried and confused about polls' results, because the candidate they think has lost the election is neck to neck with the candidate they think has won the election and that the polls as shown show that either candidate can win or lose the election.
The bigger liberal newspapers have tried to change the picture with massive attacks against Trump before the debate, but the polls from battleground states have not shifted in favor of their candidate after the debate. A battle they think will be easy has turned into dirty fight capable of sinking their candidate. It is either the 'Clinton Political Machine' is ineffective or that that the job has been made too difficult by the candidate's track record in office as secretary of state.
It is still difficult to imagine seeing Trump on his feet and still politically relevant, despite the massive opposition from the big wigs in the Republican Party and the continued disparaging of his character by his opponent toward the November election, in continuation of the job of the Republican Party big wigs.
The pointer that the polls give us, is that Trump that professional politicians hate so much and don't know what to do about him, may turn out to be the next president of the United States. They have begun to see the handwriting and they have begun to turn back to embrace him, amid the controversy about all that have taken place during his party's primaries. And why the New York Times says if Clinton's polls numbers continue to fall.
​
NEWS AND FEATURES
News & Features Around The World