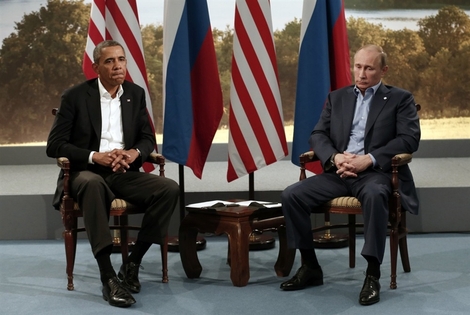 Barack Obama and Vladimir Putin
President Barack Obama said at a press conference in Sweden on his way to attend the G20 meeting in St. Petersburg that the red line was set by the international community and not him. Further, he said that it is the credibility of the international Community and the Congress of the United  that is at stake and not him.
The president did not say that whatever the decision of the Congress that the buck still stops on his table; to sign or veto the Congress decision, and as the president who has asked for the Congress approval, if the Congress refuses the nod, it might mark the way his administration will be viewed for the remaining period of his term, as contained in one of  New York Times recent reports.
President Obama left the G20 meeting after its deliberation without assurance what to do about Syria, and uncertainty hangs in the air in the United States about what will be Congress decision on the president's request for a vote. The New York Times reported that the president was returning to continue the lobby for Syrian intervention. The argument between Russia and the U.S. over Syria remains and the role of the United Nations Security Council  unresolved. Observers see the Syrian debacle as having dovetailed into a devil in the detail diplomacy between Russia and the U.S.
Russia is unconvinced that the Syrian regime may have used chemical weapons against its own people as being claimed by the U.S. Both Russia and the U.S. are both members of the UN Security Council and signatories to the council's resolution about dealing with the issue such as the one in Syria. Ban ki-moon, the UN Secretary General had said that only the Security Council could declare war against Syria and any country that would do without the Security Council's approval will be for retaliation of an attack. It means that the UN and Russia are on the same page. In this case, as being claimed by many people in the U.S. against the country's planned Syrian intervention, the U.S. has not been attacked by Syria, and may not have the legal right to attack Syria without the Security Council's approval.
The situation the U.S. suddenly find itself, though hurt by events in Syria and does not want to be mere spectator to slaughter, part of Senator John Kerry's advocacy, is one of frustration. The country's new permanent representative to the UN Samantha Power said it clearly when she condemned Russia's role in the Security Council while the G20 meeting was opening. She said that Russia has made it impossible for the world to intervene in Syria. Before her, Putin had said that both U.S. and Russia are signatories to the Security Council's resolution, and that if the U.S. will not abide by an agreement it is a part, it will be better the chaos begin from the Security Council, because according to him it is illegal for the U.S. to refuse to abide by what it agrees on paper, and for it to unilaterally attack Syria will be seen as an act of aggression.
What has Edward Snowden got to do with this? Putin brought the Snowden issue into the diplomatic powwow. He cited how the U.S. failed to allow Snowden fly to a country where he could have been extradited and allowed stranded in Moscow. The anger of the U.S over Snowden and Russia's refusal to hand him over has not fully healed. But Russia has said it refuses to extradite Snowden, because it has no extradition agreement with the U.S. And Putin has made another strong case using the Security Council's provision as members having the right to veto a decision, and that the Security Council is not a rubber stamp any country can use to achieve its desire without expecting other members to express their views.
And people are asking that if the Security Council members have not agreed on military intervention in Syria, why can't they continue seeking other peaceful means to help Syria as being sought by its secretary general? Is it by military intervention alone that Syria can be helped as a country in fratricide? Does Assad need to be punished to show repugnancy of the chemical weapons used by yet to be ascertained side in the civil war? Why can't the UN be allowed to conclude its findings, and let whichever side in the war that may have used the weapons be confronted with the stark truth, and be asked to bow to a political solution with the Security Council members in total agreement? And if the erring party still refuses to abide, the Security Council can then decide what punitive action to take to resolve the issue?
People say the first need for the Security Council in Syria is a ceasefire and not a military intervention. People are silently praising Germany for its muteness over the Syrian debacle. People are silently praising Britain for the quiet manner it has handled the vote over whether to intervene or not militarily in Syria. Many countries are asking for strong response to events in Syria, but only France and the U.S. are committed to military intervention, and France is waiting for what the U.S. Congress will say before its own parliament will vote. Washington and America are two different entities. Americans are against military intervention, but the politicians in Washington, who are in favor of intervention are lobbying others in what has become a high stake effort to have their way against the wish of the people.
With Russia and the U.S. amassing weapons of war around Syria, people are wary of unwarranted missions, which may trigger a long time of war in Syria.