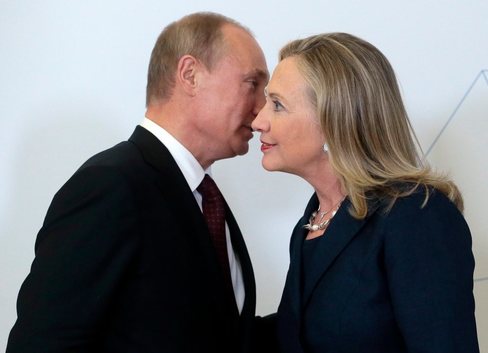 Vladimir Putin and Hillary Clinton, when the going was good (Courtesy:The Sun)
Politics is dirty and brutal. It is not a game for the weaklings. You have to be rich or be able to connect to the rich or those who would make the votes come your way and be ready to pay the price for any stupid act either with domestic or foreign organizations that also have their own political or economic interests to protect.
In politics, no politician acts alone, and no politician can claim to be a saint or pursuing sainthood. It is about getting the votes out and continue to mesmerize the electorates, whose interests politicians claim to champion and protect.
The media as the Third Estate of the Realm has lost its independence to politics, because politicians and their rich acolytes pay the pipers and dictate the tune. People, journalists inclusive, get killed for politics by politicians and their thugs, when the political water has been poisoned.
Any country with poisoned political water needs an Elisha for healing and to make the political water pure again. Just like America's political water has been poisoned and the country requires an Elisha for healing and purity.
Remember that immediately after the poisoning of the political water in Israel in the time of King Ahab and his Queen Jezebel, in their fight against Elijah, God delegated three prophets, who continued Elijah's work, and one of them was Elisha. He healed the impure the impure water in Jericho, which had caused fruitlessness there.
With the poisoning of the American political water by Russia, as the story has been told time and time again, from Russia's hacking of the Democratic Party's computers, and the publication by Wikileaks from the materials, Russia has achieved a political aim of weakening America - politically. No progress can be achieved or expected, when political players cannot agree to work together, with both camps accusing one another of wrongs equivalent of  treasonable felony. The democrats accused the republicans of conspiracy with Russia against America and the Republicans are accusing the Obama administration of surveilling political opponents.
And with the arguments and counter arguments between politicians of different ideologies and political camps, and vows by the Democrats not to have anything to do with the Republicans until investigation into whether the Republicans or Donald Trump camp conspired with Russia to win the election is concluded, amid fierce disagreements, with a larger share of the media taking side against the government of the day, political fruitfulness in term of bipartisanship may be a thing of the past, unless the political water is healed, and bipartisanship is restored. 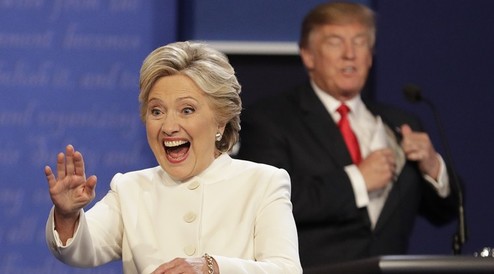 Hillary Clinton and Donald Trump, during one of their debates prior to the election won by Trump (Courtesy:The IndiaExpress)
America has two major political parties. One of the two party hacked by Russia. Why was the other party not hacked. The democrats and their supporters tend to say that the Russians hacked the Democratic Party, because the party is Russia's enemy and that the Republican Party is not hacked, because the party is Russia's friend. Far from the truth. Ideologically, Russia and America are not allies. Therefore, Russia cannot be a friend to any of the political parties in America.
On the hand, some people had said that the two parties were hacked, and that it was only the Democratic Party's materials that had been published by Wikileaks and that damaging information about Trump may be coming. But the Republican Party has said it has good protection for its computers and it is why they are not hacked and accuses the Democratic Party of having compromised the security of its computers.
But the Democratic Party's bigwigs and their supporters, in and outside the media, don't consider the argument that someone may have to compromise the internet security of a computer, for hackers to have access. No, the Democratic Party cannot be wrong, because it is populated by saintly liberals. If an Elisha should emerge in America today, he may not need a garment left behind by Elijah to heal the country's political waters. What he will do may be to tell the political actors in the Democratic Party that they are not angels, that they are capable of mistakes and that owning up to their own mistakes of having compromised their own computers to hackers, was the beginning of the poisoning of the America's political water.
It is the truth and the only weapon that can restore America's political waters, if the DNC will listen and act with patriotic zeal. All the arguments about whether there were contacts between Trump's campaign and the Russians, and whether there were contacts between Russians and members of Trump's campaign, are parts of the insanity, arising from the poisoning of the America's political waters by Russia.
Have there been no contacts between Russians and Democrats at all over the years? People have been asking on the streets that If in truth Russia had interfered in the elections as being peddled by a section of the media, did Russia hack the computers of the America's electoral body, and was the Russian hacking the enabling factor for Hillary Clinton's winning of more popular votes than Trump? ​No, instead of providing information to help the American public, they said Putin wanted Trump to win against Clinton. What is wrong with Putin having a choice of who he likes to interact among contenders for a political seat in another country and wishing the person he does not want interactions to lose?
And if it was the reason for the hacking oif the DNC computers and publication of the party secrets, what had caused the later differences between Putin and Clinton, when the two were known to have been in good term earlier? Are we to compel permanence of political friendship, rather than political interests? If their political interests have changed, are we to hold Clinton's opponent in an election responsible?
NEWS AND FEATURES
News & Features Around The World