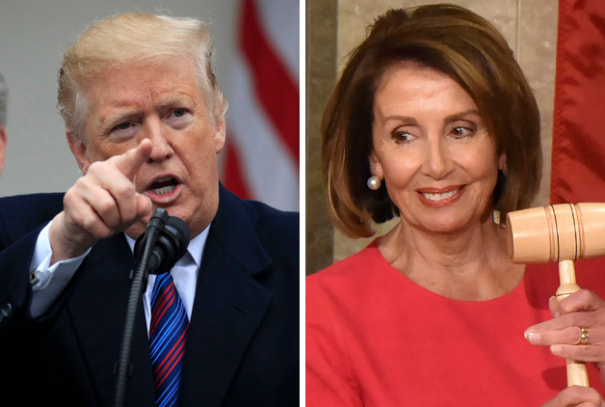 Impeachment trial in the United States will begin at the senate on Tuesday in the case brought against President Donald Trump by the Democratic Party controlled House.   This follows the House delivery of two impeachment articles to the senate last week.
​    Seven impeachment managers were televised walking in a  solemn and near mourning attitude each holding a file and a female member carrying a file likely  containing articles of impeachment being conveyed from the House to the senate.
It was a moment that depicts something serious in the annals of the country's history.
After arriving at the senate, Adam Schiff, who spearheaded the impeachment hearing at the House was shown making a statement based on the articles and the charges against the president  before the swearing of the chief justice and the senators.
Just as the impeachment managers are ready to prosecute, Trump's formidable defensive team, comprising the best in law,  is also set to go to work in defense of the president against the charges of abuse of power and obstruction of the Congress, leveled by the House.
Some observers say the fate of Trump seems like that of a man telling his adversaries not to celebrate his downfall and that it is possible for a man to rise again after a fall. A reminder of the cliche that says the fall of a man is not the end of his life. Given the words of Speaker Nancy Pelosi, which curious observers term as reflecting the minds of Democratic law makers, saying Trump's impeachment is forever and irreversible. Pelosi made her statement at the House and repeated the same during a media interview, underscoring what is viewed as  the anger of majority of law makers in the House and the vengeance nature of the House against Trump. People are aware of the beginning of the trouble between President Trump as dating back to the election campaign prior to the election and his defeat of the Democratic Party's candidate. The party and its members never agree that Trump truly won the election without the help of Russians. And they .have openly sworn to impeach him. Some of the members of the House actually say they have been elected to go to Washington to impeach Trump. Many Americans had thought that Trump would be gone with the Robert Mueller's probe into alleged Russians' interference in the election. And now there is a divided chorus with the Democratic Party members singing quid pro quo and Republican Party members singing no quid pro quo.
Meanwhile, no one is certain of the outcome of the battle between the president and his adversaries. Given the partisan nature of politics in Washington and the impeachment undertaken by the Democrats alone without a single Republican vote. There is a consensus of opinion among observers that the senate controlled by the Republican will absolve the president, no matter the level of transparency and fairness of the trial, following the Democrats' partisan showing during the impeachment hearing at the House. It is also believed that the Democrats are working to fulfill their promise of vengeance against the president and that the president's wrongdoing has not risen to a level of impeachment. And Republican law makers put up a robust and superior counter-argument against Democrats' position in the House that the president has committed impeachable offense. There is almost a certainty that the president will be absolved of wrongdoing at the senate, while the battle's outcome between the Republican Party and the Democratic Party on one side and the President and his adversaries on the other side will wait till after the November election results.
Aside from the legal defense team that the president has put together, observers believe that the powerful economic situation in the country and his foreign policy thrust represent the president's strength. The economy is doing well and the foreign policy thrust has placed the country on a path of strength against foes as shown by the encounter against Iran over the killing of Qassem Soleimani, a development that has left Iranian leaders shooting without precision, resulting in downing of an aircraft, death of innocent 82 Iranians, 63  Canadians and 11 Ukrainians, and harvests of discontent for Iranian leaders at home.