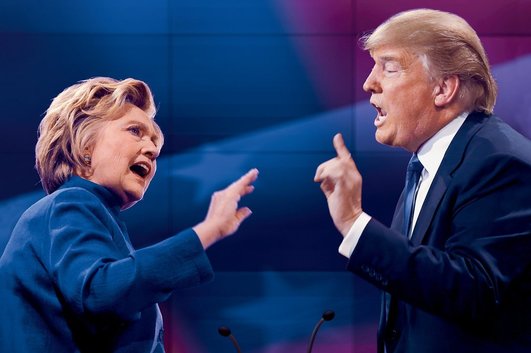 Hillary and Clinton and Donald Trump arguing to convince voters about whether America is already great or needs to be made great again.
Americans want good governance with credibility. It is why the media is there to hold the leaders accountable.  It is why, people say, the three arms of government,  are independent of one another, to ensure checks and balances between them.
But it seems along the way, something went wrong, and created a renewal for Americans to expect greater performances from their leaders, after every change of the baton, between a newly elected president and an outgoing president.
During the last electioneering campaign between Donald Trump as the candidate for the Republican Party and Hillary Clinton as the candidate for the Democratic Party, Americans heard about the need to make America great again and a counter argument that America was already great, and that all that was necessary was ensuring the continuity of America's greatness.
The results of the elections show that Americans in the cities like California and New York believe in the narrative that America is already great and that the country only needs ensuring continuity of her greatness, while voters in the battleground states think there is a need to make America great again.
Many Americans living and working in the cities also believe there is a need to do something to lift the burden of taxation off their shoulders. They talk and complain about the burden of the amount that Uncle Sam takes from their pay checks as tax. They say that they know and say that Uncle Sam doesn't play with own share of money from workers' pay check.
Therefore, there have been so many silent prayers for the day to dawn, when Uncle Sam will consider giving back part of the money that workers pay as tax. When words began to circulate that the Republican Party presidential candidate had a plan to cut taxes and that the reformation of the tax code will likely put money back in workers' pockets, it was hardly believed, but viewed with suspicion and skepticism.
But the moment the election results show that Donald Trump has won the election and that he is the next president in waiting, the thought about a change in the tax code and that it will favor workers becomes a matter of Great Expectations among many struggling Americans, who cannot understand reason for working over 40 hours every week, endlessly, without a hope of a day that  salvation will knock on the door.
With the latest news about the confirmation of the new  administration's decision to change or reform the tax code toward enhancing ordinary Americans' happiness, it rekindles the story of Charles Dickens' "Great Expectations" about wealth, poverty and the triumph of good over evil. Many American workers say it is evil, for them to work and live pay check to pay check, without the government doing something about it, and that to think a country is great that makes workers live pay check to pay check, is mind bungling.