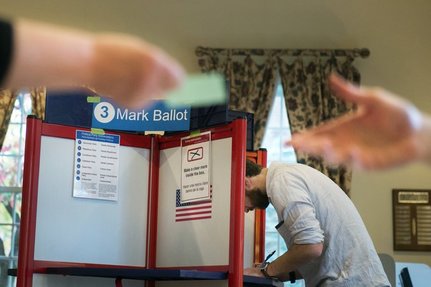 A voting booth with a voter in action
Americans go to the polls on Tuesday, November 7, for election of governors and deputies, and other elective officials from mayor to assembly members, among others.
Many people voted early before they left for work. Others may have rushed out of work early to go and vote, to avoid missing in action, in the use of the power against autocracy.
With the president not on the ballot, voters seem to count other elections as irrelevant, and they have little or no time in their calendar for it. News reports will reveal whether voters turn out is high or low.
Waking up in the morning, a remembrance of a card in the mail about your eligibility to vote and another card as a reminder for you to vote today come into your mind. You went to bed the night before with so many things playing in your brain, and voting was not one of them. You have the unpaid traffic tickets, a phenomenon that has become a big trouble for motorists.
While you arouse from sleep, you remember you have your car in a place that will be cleaned and you need to go get it out to avoid adding another ticket. As you move the car, you remember it is the seventh day of the month and the climax to the strange names and photographs you have been seeing on the streets from New York York to New Jersey and other places.
Voting is mandatory to you as a citizen and you are compelled to adjust your schedule to accommodate a journey to the polling station. As you arrive at the Fire Station, where the voting is taking place in your neighborhood, you think about a space to park to avoid a parking ticket. You see a lady driving into the back of the Fire Station, despite a notice that reads "Parking For Fire Station officers Only".
You take the risk and follow her into the back of the station. You remember that everything in life is a risk, and that coming to life itself is a risk, because there is no guarantee one will not die in childhood or get killed by a deranged fellow as one is growing up. And that politicians themselves take risk spending so much money campaigning for attention, unsure of whether they will be voted or not.
The lady walks out of her car and heads to the front of the station. Well, if anyone comes and asks a question about wrong parking, one can quickly jump into the car and apologize for wrong parking. She walks into the polling station and the man follows behind. There are only about four voters on the line. An official asks for last name. And based on alphabetical listing, your last name is fished out and your signature on the paper tells you it is time to vote. You sign a document or two and you are shown the polling booth. You press the button next to the name of your choice candidate and satisfied that you have not made any wrong choice, you press another button that says "Vote here." And you have voted. No police officer in uniform. One cannot rule out the presence officers from the FBI and CIA.
The entire exercise is about ten minutes and you walk out of the station with a sticker that says "I Voted Today." That may be peculiar in a neighborhood of 9000 residents in comparison to a place like Flatbush in Brooklyn, where voters stay on a queue up to one hour before voting. But to your chagrin, every person you have asked if he or she has voted don't have no positive response. Some people don't remember it is general election. Some people think the politicians don't worth their votes. Some men talk about being too busy and have delegated their wives to go and vote.
One reason for general apathy is the president that is not on the ballot. Voters seem to care more about the presidential election than all other elective posts. But some still say this is the lection that counts most, because you are voting for officials you can ask about why residents have become whipping stock for parking regulations and are parking their cars, while police officers park their cars free without molestation.
Don't we all pay tax? Aren't police officers paid for their duties? And why are not they made to use paid parking garages like other motorists, when they are not on assigned vehicles used by detectives? Do we all have to be police officers to avoid tickets for wrong parking, whether you drive your private car as an officer or on official car on official duty? And is it true that ticketing for wrong parking in major cities is a big business between the garage owners and the police?
These are some of the questions voters can press elected officials to answer. It is why voters must be out there to vote the right persons and not allow political parties make candidates have free rein without the required challenge from independent voters. One can be sure that parties will move their members to cast their votes for their members, irrespective of the absence of independent candidates.