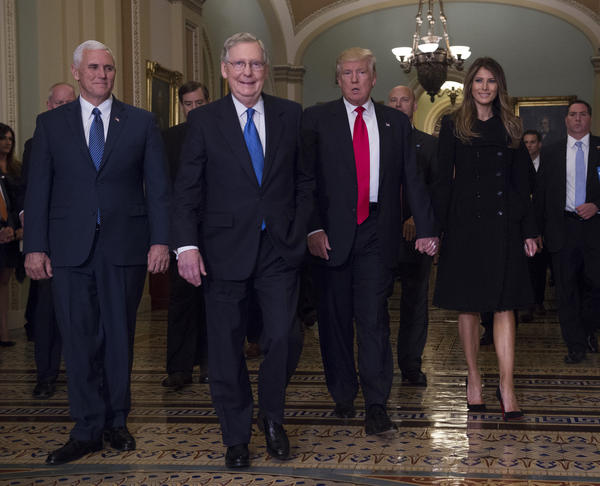 Vice Mike pence, the senate president and President Donald Trump and wife
I had blood pressure on my arrival in the United States in 2002. The blood pressure followed me from my country into the U.S.      At my first medical examination at a makeshift health event in Miami, I was told by health personnel in attendance that my blood pressure was 164/.
I was advised to see a medical personnel immediately for follow up. But I did not see a doctor until one day six months six months later in New York after I had started working and I felt highly uncomfortable.
The discomfort led me to a Pharmacy, where a Pharmacist took my blood pressure with one of the blood machines on her store shelf and she discovered my blood pressure was over 190/. She did not need to advise me to see a doctor before I walked across the street the next day to see a doctor.
The Pharmacist had exclaimed, "You will get stroke." I did now want stroke. I was attended in the hospital without anyone asking for any document. I left with a prescription. But later the bill came in the mail. The bill was a little high than I could afford. As I contemplated how to pay the bill out of my meagre income, a lady one lady walked into my work place and asked whether or not I was on Medicaid.
I told her i was not on Medicaid. Right there, she brought out papers and registered me for the Medicaid. The benefit card later arrived for me in the mail. After being on the medicaid for a while, I received a letter, informing me that my income had gone beyond the level of people allowed on Medicaid.
I went to the Medicaid office. I pleaded unsuccessfully for me to be allowed to remain on medical benefit. As I contemplated how to manage my new circumstance of getting my own health insurance, I got a job that gave me all the necessary benefits that I needed for a better life, Including health insurance.
A reminder of the time that I worked in Nigeria and I had health insurance benefit through my employers. But the type of prescription that I was given for my blood pressure in the U.S., would not have been available for me in Nigeria, based on my experience. And that is the beginning of the America's political song, a country where everything have been given solid foundation and all that is necessary is maintenance and oiling of the system.
But the politicians have taken the American political political song out of proportion and they have introduced a dance akin to struggle of self protection of themselves and their supporters. Democrats and their supporters want to rule all the time, just as the republican party and their supporters want to rule all the time. But the Constitution has not made provisions for any one political party to rule all the time.
Four years is what the Constitution allows any winner of the election to rule and for an election to hold for the people to decide for a reelection or elect a new leader. The Constitution allowed fair criticism and media role of holding the government accountable, but not declare moral equivalent of war, for any reason against whoever emerges a president after an election. Isn't it possible to investigate Russian alleged interference in an election without declaring war on the winner of the election? Is it fair to declare winner of election guilty of collusion without a genuine prove there has been collusion?
Politicians on both sides of the aisle are the same. They are humans and have the capability to manipulate. They have resultantly  killed the bi-partisan nature in the system. When the health system was not perfect, Obamacare was instituted to work toward perfecting the health care system. But the Democrats packaged it in secrecy without allowing the input of the Republicans and without public scrutiny.
Therefore, the failing of the Obamacare is the failing of the Democrats. Without the failing in the Obamacare, the Republicans would have nothing to show the public as the failings of the Democrats. But if the Republicans cannot cooperate like the Democrats and fashion a health care bill, even one without perfection as done by the Democrats, it is their headache for allowing the Democrats to stand on their way.
But whether they like it or not, they must give America an alternative health care bill or be ready to stomach their pride by sitting down with the Democrats to cure Obamacare of its illnesses. At least the Republicans are making their bill public for scrutiny, unlike the Democrats, but whatever perfection those Republicans voting against their own health bill are looking for is beyond curious observers.