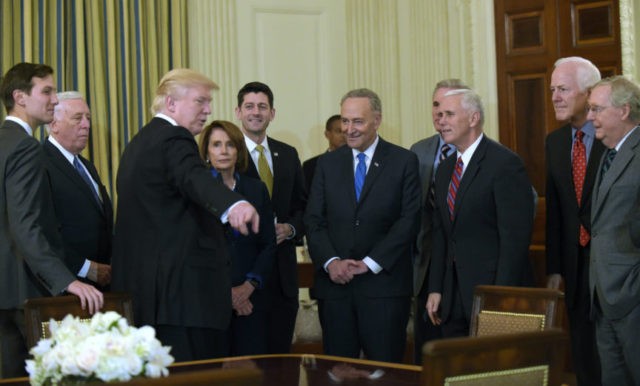 President Donald Trump, Nancy Pelosi, Paul Ryan, Chuck Schumer and Vice President Mike Pence, among others.
The Republican Party says that Obama Care is sick and dying and needs to be repealed and be replaced. The Democratic Party agrees that that health care program is sick, but that it only needs cure!
President Barack Obama, who owns the health care program as his signature program agrees with the Democratic Party. But the Republican Party insists on repealing and replacing the program.
However, efforts by the Republican Party led Congress to repeal Obama Care and replace it with the America's Health Care is at the cross roads, over disagreements by members of the party, about reliable reports that if the current legislation by the party is passed as it is currently written, about 24 million Americans will be without health care
The legislation was pulled back from voting on Friday, due to lack of assurance that it will pass, against expectations and reports in the media - running almost one week - that the White House said it had the numbers to ensure the passing of the legislation.
The argument over the legislation among various Republican Party caucuses in the House reached its Zenith with some members of the party asking for more work to be done, to avoid about 24 million Americans losing their health care coverage.
But Speaker Paul Ryan had said that he would get the Congress to pass the legislation and he had argued feverishly that the new health bill will cover all Americans as demanded by President Donald Trump and that all that had been said to be wrong with the legislation were what were needed for a better health care program.
The fight over the content of the legislation and the manner it was reportedly put together in secrecy was at the beginning between the two Pauls - Paul Ryan and  Senator Rand Paul. But despite Speaker Ryan's assurances, the postponement of the voting from Thursday to Friday, toward ensuring that everyone was on board, some hush hush last minutes amendments in the legislation to take care of areas, which dissenting members of the party had opposed to ensure the passing of the legislation, still fell short as about 35 members reportedly withheld their support, and this compelled Ryan's late decision on Friday to pull the legislation.
Ryan allowed President Trump to announce the decision to pull the legislation and the president said that the problem arose because no member of the Democratic party accedes to the legislation. Though, the party agrees that the program is sick, but for political reasons, it will not agree with the Republicans in repealing and replacement. In the same manner, the democrats says that decision to repeal and replace Obama Care is political and not for any reason to improve the lots of the common man. Thus, in a seemingly angry manner, President Trump said that the Obama Care will remain the country's health care program until it completely implodes and becomes unmanageable, despite the manifest problems already arising from the program, and he said that Nancy Pelosi and Chuck Schumer are henceforth to be responsible for the continued existence of Obama Care, and whatever problem it becomes in the future.
Analysts have been quick to say that President Trump should not have given up on the attempt to have a new health legislation, because of the failure to get enough votes to pass it at the first attempt. The fate that the legislation has suffered is said to be part of the difficulties, which it entail to make laws, and that it is part of the price for freedom, which seems like the biblical narrow road to heaven, unlike the wide road that accommodates a large number and leads nowhere.
Of course, the Democratic Party members in and outside the Congress are rejoicing that the Republican Party's seven years efforts at repealing and replacing Obama Care have failed. The members are saying that that the Republican Party talks about repealing Obama Care, but they don't have something to replace it. And that the failure of the party's efforts to get their own members to cooperate for their legislation is a sign of failure at legislation.
However, curious observers think otherwise that pulling the legislation at the last minute from voting is better than allowing it to go for voting and be unsuccessful. The act is seen as an act in impossibility in advancing forward, a decision to turn back and make new plans to move forward. Therefore, these observers say that what may have happened on Friday over efforts to repeal Obama Care should not be seen as the end game for the Republican Party to repeal and replace Obama Care.
The problems emanating from Obama Care, if continued, people say, may further empower the Republican Party, and that is all it needs to do, is ensure no American will lose health care coverage and then present the legislation again, after ensuring that it has reduced the number of dissenting party members against the legislation from 35 to 22 or less than 22, since it is said that with 22 dissenting members, the legislation will pass.
Some people say Speaker Ryan has played a hard political ball and a political lesson for President Trump. And that following this lesson, President Trump will need to work harder, to make the two Pauls in his party at the Congress work together on the legislation. But others dub Ryan as a failure for thinking that getting his party to pass a legislation that would have disenfranchised 24 million Americans as an achievement, and that the Republican Party don't have a replacement for Obama Care. And that the current situation poses a challenge for the Republicans going into the next general election and a work they must get done or face voters' wrath.