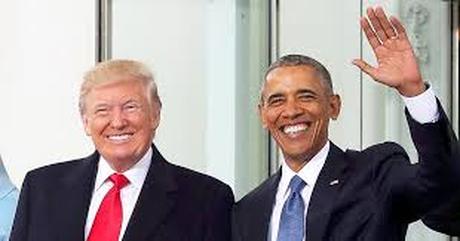 President Donald Trump and his predecessor, former President Barack Obama
More jobs were created in the United States, based on the job report for the month of April. Instead of 185,000 jobs expected from the report, the country had 211,000 jobs, an excess of 26,000 jobs.
​      Aside from this, the unemployment rate has reportedly fallen to 4.4%, and the country is reported to be on its way to full employment status.
The job report came out last week, shortly before President Donald Trump's visit to New York City, his first visit after his inauguration as president. Yet, there were enormous protests against him all over the city, based on major news reports from a section of the media.
Now, if the debate is allowed between the Democrats and the Republicans or their surrogates about who is responsible for the good news about employment boost and the lowering of the unemployment rate, the Democrats will undoubtedly say it is the work done by President Barack Obama's government before the end of his term and the Republicans will say it is the new economic policy of President Trump that is manifest.
For an observer, who does not have any political string, the question will be whether things are getting better or worse, and not who is responsible for the momentum in the job creation. Therefore, the statement will be Obama laid the foundation for good jobs, and Trump is building on the positive foundation.
The case would have been bad for Trump, if the unemployment rate has begun to climb, rather than going down. And the fact that the unemployment rate is further down and the country is on its way to full employment status within 100 days of his term as president is good enough reason to give him credit for a good job. At least, he has has not rubbished the good job reports before his time in office.
Every day, this the new president is working hard to prove his critics wrong that he is not as he has been painted, and that he will do better as a president, than as has been projected by his political enemies. One luck that Trump has in disguise is the mammoth of protests and demonstration that have followed him into office, indirectly galvanizing him to do things to improve on Americans lives, against what would have been without protests, demonstration and the always bad image and impression about trump from a section of the media.
Obviously, there is no where that people have said that things are getting worse under Trump. There are good intentions to lower tax for everyone and to institute a new health law for all Americans. The only grey area that Americans don't seem to agree is whether the country should have open border or controlled immigration and push out illegal immigrants, no matter, whether they are criminals or not.
As many Christians sing on Sundays in Churches around the world, I can hear Americans singing secretly that things are getting better, and not bad or worse.