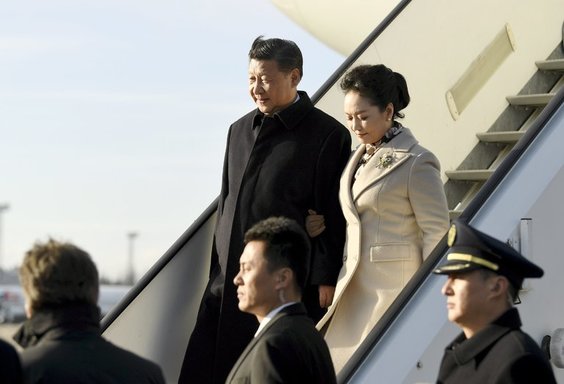 President Xi Jinping arriving on a visit to the United States
President Donald Trump and his Chinese counterpart, President Xi Jinping of China are  meeting on Thursday in Maralago, Florida, to discuss bilateral issues.
It is not whether the two leaders are meeting far away from Washington or why they are meeting in Mar-a-lago, but several issues that both leaders are expected to talk about, with each leader out to protect the interest of their respective country.
Many Americans, as well as Chinese people in America and back home, are expecting to hear the ways that the two leaders will affect domestic and international issues. One of such areas is trade, which the American leader has said is greatly in favor of China against America.
"The meeting with Xi “will be a very difficult one in that we can no longer have massive trade deficits and job losses,”​ President Trump was reported to have said a week before Thursday's meeting with Jinping. Observers say that Trump has not changed his stance on trade involving China, considering many of his statements during the election campaign, against China.
Although, many anti Trump has said that there is little Trump will do stop China's enjoyment of trade, because according of a great belief that America is financially indebted to China. Everywhere people talk about America and China, the issue of America's indebtedness to China to the tune of $19,510,000,000 and how America will get out of financial trap, is always on the table. The indebtedness makes many observers say that China holds an advantage against America.
However, reports that {resident Trump is determined to change the course of trade between the two countries and that he has actually signed executive orders targeted at serious enforcement of anti-dumping laws and dumped goods. The Commerce Department and U.S.Trade Representatives have also reportedly been ordered to conduct comprehensive studies on the cause of the U.S. trade deficit between China and America. Meaning that at this time, America lacks the knowledge of the cause of the trade deficit between the two countries.
It is here that differences between campaign rhetoric and reality manifest themselves. After the campaign rhetoric, President Trump has asked for studies to enable him know the cause of the trade deficit between his country and China, without which he would be unable to do anything. As at the time of the meeting between Trump and Jinping, the study ordered by Trump has not been submitted to Trump.
But reports say that many people, including Trump's political opponent, agree that China enjoys too much trade advantage against America, and that there is a need to level the playing ground. Aside from the Trade issues, another area of importance in the meeting between the two leaders will be the nuisance that the North Korea has constituted itself with the every =day testing of missiles
North Korea is reported as the China's reliance for the development of nuclear power. Yet, North Korea is said to constitute danger in the region, where China holds sway. The question thus arises whether or not Trump and Jinping can agree on punitive measure against North Korea.