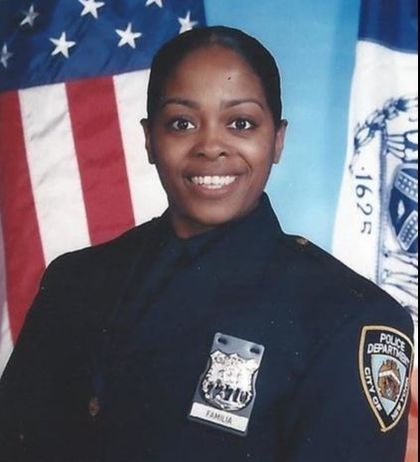 Officer Miosotis Familia (Courtesy:New York Times)
Miosotis Familia, New York State Police Officer, killed by a gun man in her car in the Bronx will be buried today..News reports said Familia sat in her car, kept watch in the area, when the gun man came and shot her on the head.
Officer Familia had been descried as a warrior. "Make no mistake: Officer Familia was murdered for her uniform and for the responsibility she embraced," New York Police Commissioner, O'Neill said in a message to his department, according to New York Times.
O'Neill is reported to have said that it means absolutely nothing, if the police regularly achieve lower and lower figures, and one of their own is brutally shot and killed.
O'Neil was silent on the fact that the assailant in FamilIia's murder story succeeded in killing Familia, because the officer was in a non-bulletproof car, and that if Familia had been in a bulletproof car, her life could have been saved.
At the time Familia was killed last week, it was possible for the NYPD to give her a bulletproof car, because according to reports, about 2000 police cars in New York already had bulletproof. Raising the question about why some police cars still lacked bulletproof. Was it for lack of funds?
If we so much cherish the lives of our police officers, and we are aware that lack of bulletproof cars expose them to the danger of getting killed, why do we give bulletproof to some cars and leave some other cars without bulletproof? It is here that Mayor Bill De Blasio's role comes in as the city's mayor.
De Blasio is the mayor of New York City and his office is responsible for the funding of the police, especially ensuring that the police have the equipment to do their job. Already, De Blasio has fallen into disrepute for abandoning the state and heading to Hamburg to organize protests for the left wing politics, according to New York Daily News opinion, which has asked the mayor not to return from Hamburg to New York.
It is already clear that De Blasio is a left wing organizer, who will spend money on left wing politics and leave unattended the needs to ensure safety of New Yorkers, and especially the police - to do the job of keeping the city safe. It is certain that De Blasio will return to New York against the Daily News advise to him, and will possibly play a role at Familia's funeral. Though he had failed to ensure her car was bulletproof, and she got killed in the process.
Will De Blasio apologize for causing Familia's death? Will O'Neill be bold enough to challenge De Blasio on the lack of failure to ensure that all police cars in the city are bulletproof? Why should the state allot funds for bulletproof to just 3,800 cars, and only 2000 had bulletproof by January? Why are all police cars in New York not bulletproof toward ensuring safety for all officers in their cars?
Specifically, the problem about some cars having bulletproof and others not bulletproof may not have been much about lack of funds, but lack of adequate supervision and carelessness. Mayor De Blasio surely has more time and attention to organizing the left wing protests against Donald  Trump here and abroad, than keeping New York City safe for all.
The fatal killing of Familia of the NYPD shows that police in less developed countries, where lack of equipment is the bane, is no much different to the police in New York. Yes, for lack of life saving equipment.