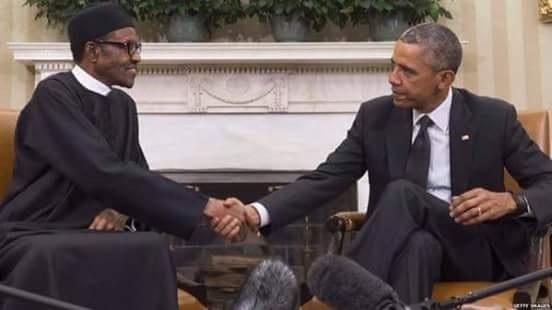 Presidents Buhari and Obama (Courtesy: Boyo Oladimeji on Facebook)
President Muhammed Buhari of Nigeria should have arrived in the United States by the time you would be reading this. Coming to the US just 30 days after he was sworn into office allows one to ask questions about Buhari's personality and his type of leadership, amid continued killings by Boko Haram in Nigeria and embarking on a journey on a weekend that Moslems ended their fasting.
Remember that Buhari is a devout Moslem. With this in mind, the earnest question is about what may have attracted Buhari to accept an invitation from President Barack Obama so soon after assuming Nigeria's leadership without choosing a more appropriate date? Can it be for a wish to identify with a president who is popular abroad, but a little bit in a struggling motion at home?
No matter what President Obama's critics at home may say about him, this president is still popular abroad. It is here that a look at Buhari's past antecedent may help to let you as a reader into his personality and and the type of a leader he craves to be.
As a former military leader 32 years ago, Buhari craved accountability, allowing - his second command - Tunde Idiagbon breathed down the throat of suspected corrupt leaders. It was here that his administration came into its toughest opposition, after the governments had put whole lotta of bankers in the cell and the media under the feet. The two action were his government's arch-heel.
These actions caused a rallying point for the opposition against his government and paved the way for his overthrow by some among his own men, financed by a multi millionaire, known for coup sponsorship. The difficulties the government ran into showed how hard a government seeking change could find the momentum in a pluralistic society. The sponsor of the coup against Buhari was himself swallowed in a form of military coup after he became a president in what had become the freest election in Nigeria's history.
What lesson did Buhari learnt in his first outing as a military president? And would he use the lesson to caution his government on roughshod against individual's liberty to avoid the same headache he had in his first coming? It doesn't appear to be so. As a president, he belongs to all Nigerians. If there are people his government think has questions to answer, some observers think he should do so using the rule of law, instead of using outdated military mentality.
It is the first area President Obama will be useful to Buhari by advising him to rely on the rule of law and desist from Gestapo type of rulership. There are already two instances of a Gestapo type of treatment meted to former National SecurityvAdviser, NSA, under erstwhile President Goodluck Jonathan and his Chief Security Officer. Does the law allow any government to keep people in the cell without arraignment in a court of law within 24 hours?
The current altercation occasioned by Governor Adams Oshiomole's accusation against Ngozi Eweala should not be seen as positive when the government can put its acts together and allow the rule of law prevail, instead of accusations and counter accusations without result. If you established against anyone, go to court.
Obama is a lawyer by training, unlike Buhari. Obama is a democrat and Buhari has said he too despite his military background has turned a democrat. And despite being a democrat and a lawyer, Obama has been described as being too far to the left. Despite his achievement among left leaning people in the US, his popularity among African people in Africa has deemed over the same sex marriage.
It is possible that Obama will be able to show Buhari the effect of the rule of law and justice in America. It is also possible that Obama will tell Buhari to avoid hard tackles devoid of the rule of law for any reason, as the only way not to invite the type of tackle he got 32 years ago, when his boys connived with the money bags against him. Moreover, this advise is salient because you can only achieve positive objective set out to make life better for the people in a conducive atmosphere, and not in a situation reminiscent of war.
One thing about Buhari is his love for knowledge, untainted service, courage and bravery and a desire to gather men and women with these values in his government. He showed it his first time as a military leader when he made an effort to appoint Dele Giwa (my eldest brother) as a minister of information, while he was editor of the Sunday Concord. Dele turned down the offer, because he was committed to journalism beyond the pursuit of political appointment.
And those were the days before Prince Tony Momoh became the minister of information under Ibrahim Babangida, and before Olusegun Obasanjo turned the office of special assistants to his favorite journalists' delight. Given his antecedents, Buhari is capable of helping Nigeria, but the fact is that the Nigerian situation has gone beyond redemption using thuggish ways and abandoning the rule of law.
NEWS AND FEATURES
News & Features Around The World