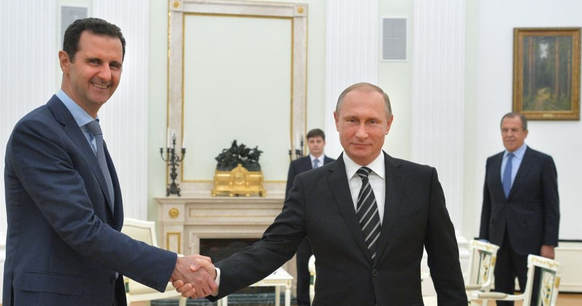 Bashir Assad of Syria and Vladimir Putin of Russia (Courtesy:Times of Israel)
Bashir Assad, Syrian strongman, needs no introduction, as the man whose country is no longer a paradise, and has turned into a theater of death and sorrow.
On Sunday, Assad headed to his paradise on earth: Russia, after a rain of missiles from the United States, United Kingdom and France, consequence of Assad's alleged use of chemical weapons on his own people.
While in Russia, news reports showed him walking into the Russia's parliament, where he met with Russia's elected representatives. Although, no words transmitted about the topic of Assad's discussion with the representatives. But a visit soon after the rain of missiles can give a glimpse or an idea about Assad's message to the Russians.
They have come again with missiles and this time it is too much for comfort. One can almost suggest rightly that Assad may have told the Russians that he no longer feels safe with mammoth of missiles and that the country has seized to be a paradise to him. He may also have sought additional protection for himself, since Russia has become Assad's new Allah that he looks forward to... for everything to escape attack and death.
Obviously, no Syrian can claim to be safe from an country where the deployment of chemical weapons has become a way to deal with enemies. In the same vein, the country cannot also be safe for Assad, a Syrian and a confused leader, who lacks the knowledge about what to do with the trouble in his country, but has chosen occasional escape from his spider hole to Russia, for the comfort that he can no longer get in his country.
It is true that Syria has been turn into shreds. And the sound of guns and the bomb have become so familiar, some people think the sound of guns and bombs are insufficient to deter opposition the evil power the center and resort to the use of chemical weapons. Assad has said time and time again that he is not responsible for the use of chemical weapons. And his Allah, Russia, has also said time and time again that Assad lacks the knowledge about the use of chemical weapons. But Assad claims to be the leader of Syria and still does not know all that have been happening under his authority.
One Syrian Refugee in the United States came on the CNN and applauded Donald Trump for allowing the U.S. to join two other countries, for the rain of missiles on Syria as a way to teach Assad a lesson and to stop him from the use of chemical weapons against defenseless citizens.
Understandably, Assad is in the same situation like King Saul, who could no longer wait for Samuel - the representative of the true God, when enveloped by trouble that he resorted to offer sacrifice himself. Assad has even committed worse atrocity - abandoning God and God's commandment to make a human country his Allah and reliance in a time of trouble.
Many observers believe that If Assad still respect God's commandments and the true and only one Allah as his defender and source of comfort, he would have resigned a long time ago and allows Syrians decide their own fate, instead of allowing the current butchery in the country.
Comment Form is loading comments...
NEWS AND FEATURES
News & Features Around The World