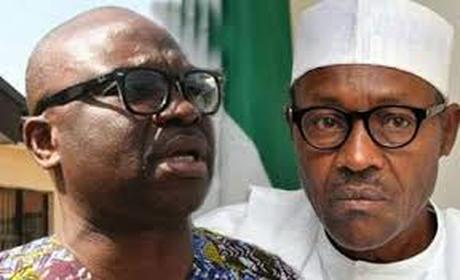 Ayo Fayose and Muhammad Buhari
Nigeria's politics is hard and needs rugged politicians. Many observers believe that Ayo Fayose, governor of Ekiti State, South West of Nigeria, fits the system. Although, many others think he is an irritant.
Others have asked, whether Fayose is indeed, an irritant. They ask whether it is ever possible to become a governor without the pedigree to win an election, especially in a state considered one of the most educated people in the country.
People in Ekiti State are considered highly literate and whose focus is not getting rich quick, and they are the people who have given their votes for Fayose to become governor, at a time no one has expected that the opposition party that has ruled the state before him can be overthrown without consequences.
It is running to three years that the governor has got the power back after he had first been tossed out through the court over questionable election issues. He has since remained essentially a voice to listen to, in the Nigerian political scene, and he is giving the ruling power a need to exercise common sense in handling simple issues.
But some observers have called him a street urchin, who delights in stopping over and eating with people they consider as vagrants on street side walks and careless of the dignity of his office. he has often fired back that he is a man of the people, and that there is nothing specifically wrong showing a sense of belonging with the people the way he is doing.
One recent development about Fayose's utterances against the ruling party and the ruling party's accusation against him as a rabble- rouser, creates the need for this report about him, his criticism of the ruling party's handling of President Muhammad Buhari's stay abroad for medical attention continuously, first for about three months, and for the second time, running to another three months, without anyone in Nigeria aware of the president's state of health, has logic and reason.
Fayose said that the president's wife, Aisha visited her husband in London and returned with words thanking Nigerians for their prayers for her husband and that that her husband's health has improved. The second time she travelled, she returned with words describing Nigerians praying for her husband as Nigerians in the smaller level, and that hyenas and  jackals will be driven out of the place on her husband's arrival, which the media said it is a way to show that her husband's health has improved.
Next, the country's vice president, Yemi Osibajo, went to London reliably based on an invitation from President Buhari. The vice president also returned thanking Nigerians and said that the president's has improved. Both Aisha and Osiyemi provided room for Fayose's next cannon against the ruling party, for the ruling party's lack of photographs to show to the world that the president is indeed in better condition, and not on a life machine as earlier claimed by Fayose.
Now, Fayose has said that he has about 11 photographs to show that President Buhari's health has deteriorated, and he has challenged the ruling party to show Nigerians photographs of Buhari's improved health, before he will make his own photographs public. The ruling party is still to respond to the challenge.
Where are the photographs? Is it true that Aisha and the Osiyemi failed to take photographs with the president during their visits to London to see him? Is their silence a case of silence is golden? And if not a case of silence is golden, what would they say is their relevance of traveling to London in aircrafts purchased with tax payers money, to see the president and not take photographs of him in improved health, for Nigerians to see with their own eyes?
Is a camera difficult to purchase than purchasing an aircraft they use in their journeys to London or that the hospital does not allow photographs with patients in their wards? Even if the hospital does not allow patients to take photographs in their wards with visitors, cannot the president walk out of the wards and take photographs with Aisha and Osiyemi, for them to show to Nigerians that his health has improved? Is the president not aware of agitation among Nigerians at home? Can Osibajo and Aisha claim ignorance of the agitation about the president's health at home?
Although, no one has said that Fayose may truly have photographs to show the world that Buhari's health has deteriorated, but he has logically won the argument against Aisha and Osiyemi, who have no photographs to show to say photographs don't lie. Fayose may be accused of lacking sense of reasoning, which still needs to be proved against him, but he has the logic and it is what seems to matter in politics..
Comment Box is loading comments...
NEWS AND FEATURES
News & Features Around The World