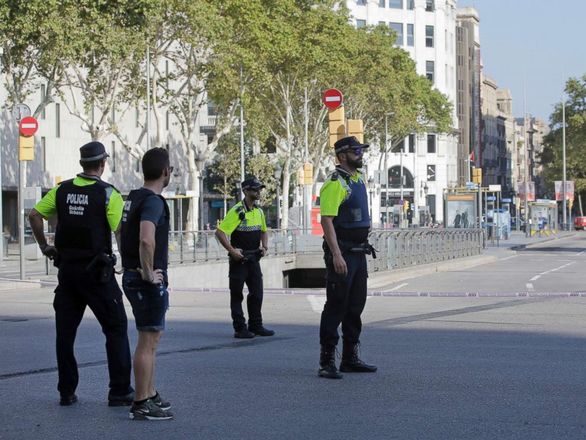 Police on alert at Barcelona on Thursday
Police in Barcelona were about to begin operation in a part of the city in the on going investigations into the terror attack on the city.
​  The announcement came on the breaking news!
Was it the police that gave the announcement for the newsrooms to announce to the world or part of the enterprising reporting of the news by the cable channels?
This is the natural question anyone who understands that certain information stands on the way of successful police operations.
How would the police operation be successful in getting the bad guys, when the operation to get them is already announced before the operations?
Undoubtedly, as reporters or journalists or editors, we want the world to know that we have access to information, but there are certain information that require discretion in decision either to publish or spike them. Information about the type of operation that Barcelona police embark on late Thursday was the type of information any editor with discretion will embargo for the good of the community, while waiting for the outcome of the operation to use as breaking news.
The police operation already compromised will only allow the bad guys to flee before the police will arrive at their destination. And disseminating such information is not for the good of the community. Instead, disseminating such information harms the community, because bad guys who are supposed to be taken out of circulation will hide and continue to terrorise the community.
Aside from the fact that making such information about police operation public before the operation is capable of criminals run away, such dissemination of information is also capable of putting police in harm's way. Criminals could fortify their own defense against the police and the battle becomes tougher or deadly for the police.
This is the time that discretion becomes better part of armour. The cable channel involved in this unexpected news breaking knows itself and one hopes the channel will do a better job next time. It is also possible that all the cable channels may have carried the news of the police operation and why this reporter has desist from naming a particular channel on which he saw the news.
NEWS AND FEATURES
News & Features Around The World