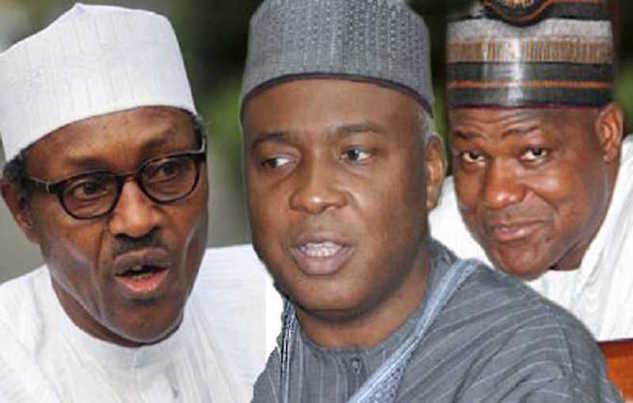 President Muhammed Buhari, Senate President Bukola Saraki, and Speaker of the house, Yakubu Dogara
Defections and the threats of impeachments have become prevalent staples among Nigerian politicians and members of the legislature.
It has become a moral equivalent of law, for politicians in the country to defect from party to party, for protection of their own personal political interests.
And the ruling party has been hit as a result of the defection of the senate president to the opposition party, and yet to be confirmed defection of the speaker of the House of Representatives.
Running to almost two months, members of the ruling party have been calling on Bukola Saraki, the  senate president, to either resign or be impeached. And now that news reports say Yakubu Dogara, the speaker of the house, is on his way out from the ruling party, the chorus 'he should either resign or we will impeach him ' have rented the air.
Although, Nigerian voters never voted for defections or threats of impeachments, daily defection of politicians across the ruling party and the opposition parties have become almost the rule. Defection is easy to undertake by politicians, but not so for impeachment of principal officers of the house.
The senate president's supporters have challenged the opposition party to carry out its impeachment threats against the senate president if it has enough support in the chamber to do so. While the senate president has boasted of having enough support in the chamber to stave off the ruling party's threats to impeach him. And one major effort by the ruling party to show force ended with the ouster of the head of the country's state security service, for leading his men to the legislature with instruction to them to blockade the entrance and disallow law makers entry into the chamber.
The fallout of the skirmish resulted in the sack of Lawal Daura, and has also led to the appointment of Yusuf Bichi as the new head for the SSS by President Muhammed Buhari, displacing Matthew Seiyefa, who was appointed by Vice President Yemi Osinbajo, amid cries to impeach Saraki and the blockade of the entrance to the legislature, when Buhari vacationed in London.
There were speculations that Buhari contemplated returning Daura to his post, but it seemed that in the face of the impossibility of returning the former head of the SSS to office, a new appointment became desirable in a show of power. Clouding the circumstances that caused the presence of the SSS's men at the legislature and the Daura's sack. Some people had said that Daura's sack by Osinbajo was due to insubordination, and others said that Daura was a scapegoat of the ruling party's unsuccessful conspiracy to unseat Saraki.
The ruling party is hell-bent at returning Buhari for a second term in office just for the sake of a second term and not for a stellar performance, some Nigeria's political analysts have said. But Buhari's supporters are quick to say that Buhari is not corrupt and that his opponents are.
Saraki has also joined the list of presidential candidates in the opposition party. It is still unknown, whether Dogara too will be joining the long list of presidential candidates in the opposition party for the 2019 presidential election. No one can be sure about the outcome of the fight for supremacy among the country's politicians. Sure, it has always been fatal, really fatal, and at times bloody with casualties.