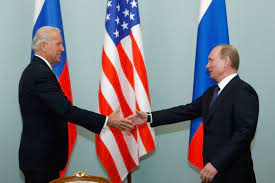 President Joseph Biden is on a visit to Europe attending the G7 meeting. It is his first journey out of the United States since his election. Biden said he would talk sense to President Vladimir Putin, his Russian counterpart, over diplomatic issues between the U.S. and Russia. One report said Biden indeed accused Putin as a killer, but Putin reportedly said he never gave such an accusation a thought.
Of course, Putin may have given thought to the concession of the Nord Stream oil pipeline  from Germany to Russia that will boost Russia's economy, not an accusation that carries no weight compared to a conviction by the court in the Hague. And Biden knows very well that his accusation of Putin as a president of the U.S. carries no weight because he is not a sitting judge in the Hague.
People are discussing Biden's cancellation of the Keystone XL oil pipeline from Canada.  They say that the Keystone XL oil pipeline should have been a source of employment for many people in the U.S.  And the reason for Biden's action, according to reports, is to avoid worsening-  climate change. And the question is being asked whether approving the oil pipeline for Russia would not exacerbate climate change.
Another issue is the crisis at the Southern border, where people stroll in the country and are welcomed by border patrol officers without questions because Biden has asked the people to come. And Biden's immigration czar, Vice President Kamala Harris, has refused to visit the border to see the situation firsthand. Rather, she has traveled to Guatemala and Mexico for fact-finding about the cause of high immigration from those countries to the U.S.
​     Curious observers are laughing at the lack of diplomacy within the U.S. government to protect Americans at home. The country's diversity and inclusiveness drive has turned into a smokescreen to score political points that serves the ruling party's objectives. Biden and Harris may not be aware that observers are already comparing the current situation at the U.S. border to a rudderless Libya following the killing of Muammar Gaddafi, and the Mediterranean and capsizing boats became death traps. And many of the poor immigrants perished in the waters.
That rudderless situation gave way to cartels, who turned willing immigrants into puns on the desert. News reports cannot lie that those cartels have taken over the travel arrangement for many immigrants from Guatemala and Mexico. America has not experienced a leadership vacuum the type that Libya had. But America seems rudderless, allowing these cartels to bring in the people to the U.S. border and watch them wander into U.S. border patrol officers' hands as asylum seekers.
​      News reports say there is no way of separating bag guys from good guys among people entering the U.S. from the southern border. So people say drug trafficking is getting worse, human trafficking is getting worse, and it may lead to a humanitarian crisis never seen in this part of the world before now. Parents live in fear of their children getting hooked to drugs entering the country from an open border.
Therefore, Biden and Harris need to resolve the issue at the southern border. Then, they need to give thoughts to the protection of Americans at home. It should be uppermost in their minds and not the gains that would accrue to their party in the long run for opening the border for people of questionable characters mixing with people genuinely needing help to wander into the country.
Americans have started paying higher gas prices at the pump consequent Biden's decision to cancel the XL Keystone pipeline. You cannot take fortune away from your country to avoid worsening climate change and hand the same fortune over to a leader of another country whom you have accused as a killer. And people in that country would pay less price for gas at the pump and hopefully add to the number of the employed.