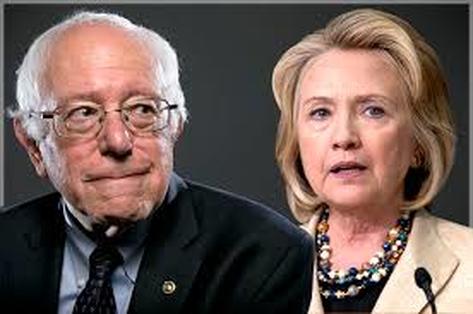 Sanders and Clinton
Great Easter singing and dancing for Bernie Sanders and his supporters with surprise victories over Hillary Clinton in Washington, Idaho and Hawaii States. News reports say that Sanders who is running to catch up with Clinton has more about 70 percent of the votes in each of the states, where Democrats voted on Saturday.
The BBC reported that Sanders trounced Clinton in three states, and the New York Times report said that Sanders seized  three states. Aside from saying his campaign's victories in those three states is a proof that he has the momentum, he says that the victories has paved the way for his nomination.
Nomination? Observers say that Sanders still has a lot of work to do before talking about nomination. It is true that he first has to catch up with Clinton in the number of goals scored and then begins a race to avoid Clinton catching up and leaving him behind again. However, one clear signal is that it is never advisable for a candidate like sanders to withdraw from a race, because of early victories by a co-contestant as some pundits have been advising or expecting Sanders to do following Clinton's early victories in the race.
Obviously, both the Democratic and the Republican Parties contests is still hot and the front runners still uncertain of becoming the nominee. Clinton may be a little bit sure of her way forward, but if Sanders continue to surprise observers the way he has done in Washington, Hawaii and Idaho, he is better not ruled out of contention and Clinton can better be advised not to rest on her oars yet.
As for the rough journey in the Republican Party's race, voters will have to keep their praying to see the better and winning candidate emerge, on who can take on the Democratic Party and not the one that the party's establishment has a plan to impose on voters, if they succeed  at scuttling the winning candidate does not amass enough number of winning numbers.
Reports said that Clinton did not campaign much in the three states won by Sanders on Saturday and that she took time off to be with the family. Observers say that this is not a good report concerning a front runner, who should be seeing ensuring she keeps her hand on the tape and not allow to be overtaken by a co-contestant. They ask that if a contestant becomes a president, would there be time to be with the family in the middle of tough state affair?
Observers ask Clinton not to take the love of her supporters for granted and not to be so self-confident to think that the race is hers when the race has not been completed and there are still chances for surprises.
NEWS AND FEATURES
News & Features Around The World