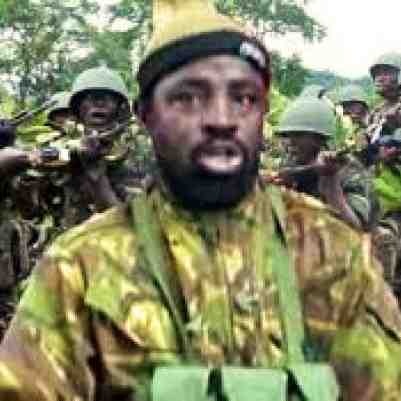 The evil and ugly Shekau
The anticipated battle of Gwoza in the North East of Nigeria between The African Multi-National Forces, AMF, and  Boko-Haram insurgents is here at last. Already, the insurgents have been routed out of several communities by the AMF. Now, Boko-Haram no longer has a place to hide, with the AMF taking the battle to it. The insurgents' headquarter in Gwoza will be under fire of artillery  anytime from now.
What is currently happening to Boko-Haram is proving the realism in a proverb that says everyday belongs to the thief and one day belongs to the owner. For several years, the evil sect has been kidnapping, maiming and killing innocent people, but its own end now seems near, as information reveal that it is preparing to defend its Gwoza fortification against the AMF's onslaught.
News published in Nigeria showed that Boko-Haram may have seen a sign of the end of its atrocities, and had freed some of its female captives and told civilians in Gwoza to leave. But the question this raises is whether Boko-Haram has suddenly become so humane to consider saving lives, considering the intensity it has been decimating lives over five years, resulting in loss of over 12,000 lives?
People say the renewed strength of the forces fighting against Boko-Haram may have caught it unaware, since earlier news had been that Boko-Haram had superior fire power than the Nigerian military. President Goodluck Jonathan put it succinctly that Boko-Haram earlier had field days, because the Nigerian military which hitherto had been under equipped had acquired stronger fire power from new equipment, targeted toward decimating Boko-Haram and allow elections in areas the sect had held under its evil forces.
However, there is fear that ugly Shekau and his boys may use the over 200 Chibok girls whose kidnap had  aroused world's attention as human shields. One of the reasons the Nigerian government had said after Chibok girls' kidnap it had exercised restraint in attacking Boko-Haram's points. But Boko-Haram seemed to have taken the Nigerian government's restraint as weakness and had enveloped the entire North East of the country with bombings and hardly a week without killing innocent Nigerians.
Amid the confusion, the Nigerian government went about seeking places to acquire weapons. America refused Nigeria weapons on the ground that the Nigeria military was not capable of using such weapons or that the Nigeria military had committed war crime,  would turn such weapons on civilians or that the government had encouraged corruption.  Another attempt by Nigeria to get weapons from China was said to have been blocked by America.
Wherever Nigeria had eventually got the weapons that had put Boko-Haram in disarray showed the unfortunate helping hands unknowingly given to Boko-Haram by those who denied Nigeria access to weapons the way they wanted. And many Nigerians had regarded such excuses as floor,sun excuses that the Nigeria military could not use flimsy and a ruse, because they said officers of the military can stand along with their counterparts from advanced countries giving their high level of education.
People say ugly Shekau must have into hiding. And that if he does not, the time of reckoning must be closing in on him. People don't rule out the possibility that Shekau may be captured or killed in battle, because the sudden awakening of the Nigeria military may have caught the evil sect by surprise and unaware that a fire superior to its own could ever come from the Nigeria armed forces.observers say that if Grendel was killed by Beowulf who sought him out in his den as ferocious as Grendel was, how could Shekau be impregnable? They also ask whether Osama bin Laden wasn't taken out by the American forces after several years of uncertainty?
Boko-Haram may be preparing for what will be its Waterloo. But certainly cannot be believed that blood thirsty souls they are can exercise any restraint asking civilians to live and releasing their captives. Let them release the over 200 girls in their captivity, forgetting about those innocent souls they have killed over the years.
NEWS AND FEATURES
News & Features Around The World