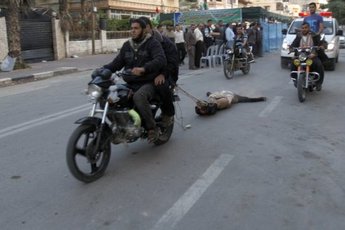 Fear of a wider conflict between Israel and Hamas has gripped the world, following their resumption of rockets attacks and bombing, death of over 20 people and damages. Rocket attacks and bombing reportedly continued between Israel and Gaza from yesterday and this morning, eliciting calls for de-escalation of the conflict to avert a regional conflagration.
Egypt's president, Mohammed Morsi has condemned what he called Israel's attack on Gaza as a disaster during a visit to the territory. Observers say Morsi's support for Hamas stems from his fellowship
with Hamas in Islamic Brotherhood.
Former British Prime Minister,Tony Blair, called for restraint on both sides in the conflict, and urged Hamas to stop firing rockets into Israel villages and cities. He said if Hamas continues firing rockets against Israel, the Israel government will defend itself and there will continue to be casualties. He said that Hamas had fired more than 200 rockets into Israel, and said it will be in the interest of the region for de-escalation of the conflict. He  made a passionate appeal to both sides against escalation of the conflict in the interest of the entire region. The US has added its voice calling for de-escalation of the attacks and asking Turkey to dialogue with Iran.
When Egypt's PM Hisham Quandil visited the region, Israel said it would curtail offensive if Hamas ceases firing rockets into its cities and
villages.
A source in Gaza connected to Palestinians said Israel started the assault, but Benjamin Netanyahu in a statement said Hamas caused the trouble, making life intolerable for millions of Israelis by shooting rockets into Israel's cities and villages.
HTML Comment Box is loading comments...
NEWS AND FEATURES
News & Features Around The World