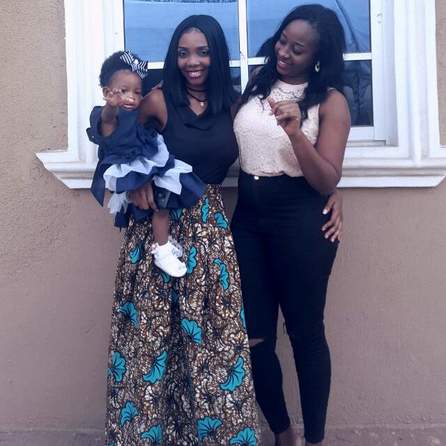 My grandchild, Tiwa Ipaye, my daughter, Omojoju Remilekun Oladele Ipaye, nee Giwa, and a family member Courtesy: Facebook)
What day is it that you can never forget? Some people may never forget  the day of greatest loss to self and the family and probably a day considered a day of rebirth that represents a gain that temporarily eclipses the loss.
In the tradition of Yoruba people, South West of Nigeria, it is a reminder of the day of birth, a day deemed as representing good and evil.
Elders say that  the umbilical cord, called 'ibi omo', in Yoruba language, is the evil that follows every child at birth, and it explains why human life consists of good and evil. The good brings joy and the evil causes fret, pain and sorrow. No human life is free from the two.
When you have a daughter, you are told that you have a birth that signifies a soft hand.  And when you have a male child, you are told you have an upper hand over your wife!  So, when I had my first daughter in 1987 after my brother's assassination in 1986, it could signify that she came with a soft hand and that my situation will become easier. And if not easier, it may not be as difficult as it had been before her birth.
But I knew that the sudden loss of a brother, who was a father figure in my life meant a a harder road to travel ahead of me and how the birth of a baby girl would affect that was not a thought that crossed my mind then. The unresolved murder made my situation more precarious. Who were the murderers? People said it was the government and developments before the murder pointed to that direction. But there were other developments also that pointed that wealthy people outside government could have done it and that put the burden on the government to cove their own nefarious path. Therefore, those one thnk are frineds may be the murderers in government or friends of the faceless murderers.
The assassination brought the memory of our late father into my mind. He had us seven, six from my mother and I occupy the third position and the third male child in the family, older siblings both male. Our father was able to see the first child through the secondary school, and he the oldest child was able to pick himself up from there and trained himself to masters degree level. He said he did not want to be the only educated child in the family and consequently ensured that his immediate younger brother had secondary school education. I was stranded as no money was available to send me through secondary school.
I despaired but continued with my struggle for education. My eldest brother told me that if he were in my shoes he would have done exactly what I did - not give up. Of course, i had my secondary school equivalent certificates as a private candidate before my brother's assassination and the birth of my first daughter, and I never thought that was the finishing point for me.
This past weekend, my daughter, Remilekun Oladele Giwa turned 30. Remilekun means lessening of weeping. My brother's 30th year memorial was last October. My daughter has already given me a grandchild, in addition to her college degree in Sociology. Rather than remembering the day of evil that my family was stabbed in the back that my brother's assassination represented, before other stabbings along the line by unfaithful friends and business associates, I allow my brother's memorial to represent a period of philosophical meditation on his life, achievements and our loss as a family, while I wait for the celebration of his life on his birthday, March 16.
But that celebration always begins with my daughter's birthday, with a glimpse of belief that children are our future. just as our father had believed in children as his future and he had put every dime he had in the education of his first child, and believing that he would pull up his siblings, the same way I look at my children as my future and ready to give them the future they deserve.
Haven't we say that children are the leaders of tomorrow? And do we know those among the kids we are having, the one(s) that would live long enough to the day to achieve the tenacious goal that will put our name and society in the way we want it? Yesterday, I was a child with so much difficulties on my path. I had thought college education and the goals beyond it were unachievable. But today, I have conquered those difficulties and I am waiting to see, where fate will direct me to utilize my knowledge in the advancement of humanity.
​    Are you a child and facing mountain of difficulties? First, make up your mind on what you intend to do for the future and then go for it, believing that you will overcome the difficulties as they arise. Don't ever give up. You may living in a country, where the value of children are appreciated and they are well provided for.Seize the opportunities. And if you live in other countries, where life is made dreary for children and your parents lack the means, pray and hope that God will see you through.