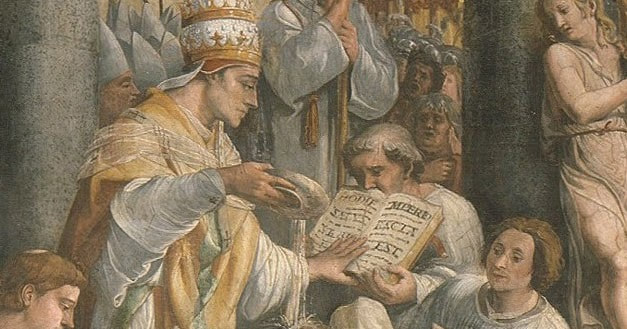 At Raphael's baptism of Constantine the Great Phot: (Courtesy:hensloweasblog.blogspot).
There was no Xmas before the birth of Jesus Christ, whose birth is today celebrated with Xmas.  Possibly without the wealthy class opposition to Christ as a messiah who raised the dead, made the blind see, healed the sick and fed the poor, and the Christ's punishment and painful crucifixion, and positively turning live's around, there would have been no Xmas.
Apparently, there are Christians who don't believe or celebrate Xmas. They say Christ was not born on December 25, and they would ask anyone who engage them in a debate to show the place in the scripture, where December 25 was mentioned as Christ's birthday.
They seem to lack a sense of respect for the Church written history and the decision to honor the revolutionary Christ with a memorable holiday after Constantine the great victory in a war and his belief that without Christ who ensured his victory, there possibly would have been no Constantine the Great!
Truly, Christ was revolutionary in his acts. People were awed with the miracles that he performed. And that the reason he was against the kings and their officials was that they cared only about themselves and their traditions. They viewed Christ as a challenge to their status-quo. Rather than listen and embrace Christ's teachings, they waged war against him, because Christ teachings were obviously opposite to their traditions.
Before the Constantine the Great's  experience, prior to Christians' persecution in Rome, Christ had shown to be a savior by his restoration of  life to the dead, healing the sick gripped by illnesses capable of depriving the opportunity to live and feeding the poor with little food because he believed in the little shared with love.
Christ not only believed in the scripture, he said he came or was sent to fulfill the scripture. He believed in the old testament and the traditions of the elders, but he was against man inhumanity to man. Though he belonged to the same lineage with David, he did not wait to be elected a king, before he declared himself a king as the son of the living God. There lies the conflict between him and the worldly kings, the oppressors, who lacked human kindness, but prefer the enslavement of the less privileged.
Without the Constantine the Great's great experience, Christ's memory would have gone into the oblivion. Their again lies Christ power to resuscitation and empowerment, and the reason the number of his followers have increasing rather than to diminish. A prove that Christ does not need anyone to fight his battles for him and that he fights his own battles, and he considers the battles against his followers as his own battles.
Though, Constantine the great was not a Christian at the time or he was a Christian like many other Christians by name and not by serious devotion, but he saw Christ with a statement from Christ in the course of a battle, that if he  (Constantine) fought in Christ's name, Constantine would  be an overcome.  Constantine continued the battle and fought believing in what he saw he saw and what he later proclaimed without being conscious of it and he was a winner.
Good that Constantine did not forget who he saw in the light of heaven and the request from who he saw. Had he forgotten the details and fought without the Christ's memory, he probably would have lost the battle. But he won, removed Christians from persecution and allowed Christian worship to flourish.
Millions of people have been emancipated by Christ around the world just like Constantine the Great. And many more people are finding favor with Christ everyday. Believe in him is to experience the unbelievable possibilities amid seeming impossibilities, and to forever live with peace of mind, which only Christ gives and never given by cult or personality worship.
Of course, establishing December 25 as Christ's birthday is a great way that Constantine the Great has helped the advancement and the course of Christianity. Is anything wrong with that? Certainly not. The wealthy only need to realize that wealth without humility and care for the less-privileged is worse than poverty.
Christ's birth in a manger and the circumstance of his parents had shown the possibility of a poor birth and the possibility to rise from poverty to something that looks like wealth. However, what any man or woman does with the opportunity at hand is all that matters. Do you care about less privileged members of your family and your neighbor? What is it that you are doing to alleviate the suffering of the less privileged in general?
Learn from Christ's simple lifestyle and activities geared toward helping others. He used his God given gift to help others without asking to be paid. He did not open a shop to turn his talent into a money making venture, but rather he threw out money lenders, he said had turned God's house into a place of buying and selling.