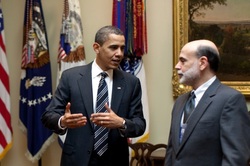 President Obama and Bernanke
Two different reports last week, one by the BBC and the other by the CBS, point to how a society should be concerned about providing for the needs of its population, evolving policies that create employment toward increasing purchasing power to boost the economy and open doors for business expansion.
The BBC reported that the United States government has a permanent resident E Visa available for wealthy people from other countries with over $500,000.00 to invest in areas of high unemployment in the country.
The visa is said to have been in existence since the 1990s and that British wealthy citizens have seized the opportunity early, and that the Chinese and the Russians are those currently utilizing the opportunity the visa has created for the wealthy from other countries to settle down in the U.S.
The CBS reported how the bad weather could affect the Christmas shopping. The CBS news naturally raised a concern of what could become the economy amid nastiness of the weather that kept people indoor for almost 7 days due to snowfalls and accompanying freezing coldness.
Interview reveals that not many people are aware of the existence of the E Visa. People say generally that there is nothing wrong with it as long as it is targeted to help ameliorate unemployment. “I can understand that a wealthy fellow could be allowed to live in a neighborhood and provide employment for a number of people, but that does not concern people who are used to free handouts,”  Andrew Pirate of Michael Stapleton and Associates said. He said he was not aware such a visa existed before he was interviewed. There is a consensus of opinion that the U.S government will not allow any character here no matter his wealth without adequate background check.
Global Pentorch has also confirmed that the weather has been a major contributing factor for inability of many households to shop for the Christmas. Hector  Colon, an employee of a security company in Manhattan said he has not purchased Christmas wears for his children because of the weather, but he hopes to do so this weekend.
Patrick Richardson, a resident of Westchester in New York said that he does not believe in waiting until Christmas to shop for his children. Edward Geogen who ran into the reporter's question time says that it is not his business but his wife’s to shop for the children. Alexander Smith, a retired New York Police Department personnel said the weather prevented him from shopping for the children and hopes to take care of the business this weekend.
Leart Jalio, an employee of American Building Management, ABM, said he bought just little things for the children before the weather became nasty.
However, despite the snowing and the cold weather, many shop owners are smiling to the banks as it is customary for people to defy odds for Christmas shopping, one of the periods the economy expectedly receives a boost.