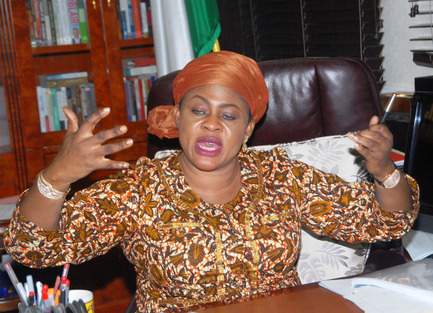 Stella Oduah, Nigeria's Aviation Minister
A Ghanaian minister  of communication, Victoria Hammah, was  reported sacked for wishing to become a millionaire in dollars before she will quit politics. It was assumed that her mission in politics and government was to become rich through corruption, and that her intention was not serving the people but her own self interest.
Dramani Mahama’s government has wasted no time showing her the way out to the street where she can trade and make her millionaire dollars and more if she so wishes without anyone asking questions. There is no sin in making a million dollars as long as no law has been broken. There is also no problem having the ambition. But certainly not for a minister whose income is far from realizing such an ambition unless in cutting corners.
But one fact that commentators have glossed over is that Hammah's statement and ambition is not alien to people in service in certain countries in West Africa. In such countries, it is even more profitable to serve as a minister than run your own business, and so many people are in politics to enrich themselves and serving the people is secondary. You get richer serving as a minister than do any other business.
Some people are saying that the problem with the Ghanaian minister is her lousiness and that she sure lack the mastery of the culture or how to survive in the environment she find herself. They say at least she has not been found embezzling any money. She has only been caught uttering her wish, a wish that may ally with what she may has seen others doing. Are there no truth in her words published by many newspapers? Let's examine them.
Apart from her obnoxious statement of saying that she will not quit politics until after she has made a millionaire dollars, she is also reported to have also said that there are pressures on her to steal money, because people thought that as a minister she is rich. The latter statement reflects a general culture and people who are supposed to be cared for by the government but are not turn to elected officials for their own share of the cake. The confirmation of this has been made in Nigeria by politicians in the National Assembly who try to justify their high earnings based on the services they say they perform to people in their constituencies who come daily to seek monetary help .
During a meeting in an aircraft on a journey to Lagos from the United States, a serving official in Lagos States explained part of the problem or causes of corruption to a a development where politicians become sources of survival for the poor who have been left behind, and this he said has put pressure on the politicians who dip their hands in the government coffer to satisfy their needs for money to meet the standard expected of them by the electorate. He said that every morning, home of elected officials have become venues of meetings to large number of deprived people seeking help either to eat or meet essential needs.
Some pundits have approved the sacking of Hammah for her expressions and not that there is a proven acts of corruption against. In addition, the government's public relations is to manage its image. But in Nigeria, they say a minister who has been found approving the purchase of two bullet proof armored cars at a cost beyond the amount she is legally entitled remains in office despite public uproar. Amid discussions over the Ghanaian minister's statement and consequence, and the Nigerian minister's authorizing the purchase of two armored bullet proof cars against regulations without consequence, there emerges another piece of news about Mr. Dolo, a Liberian driver to the president who has been caught using the president's lead escort vehicle to transport 297kg of marijuana.
Ellen Johnson Sirleaf's office welcomes the drug bust, but denies that Mr. Dolo who is being held to be charged to court heads the president's motorcade.