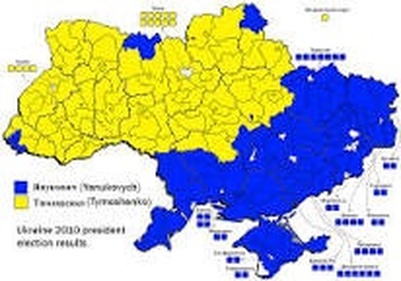 The yellow part wants to be in EU, the blue part is against
Ukraine's interim leader, Oleksandr Touchnov, has warned against separatism. Already, voices in the mix suggest a struggle for power, deep cultural division and mismanagement accentuated by corruption.
The fugitive president already declared wanted had said earlier that he remained the president and that what happened to him was a coup.
Russia's prime minister, Dmitry Medvedev, described Ukraine's uprising as armed banditry. A section of the country was reported as tottering towards Russia than remaining in Ukraine.  What now exist are uneasy silence and thoughts about how to get out of the hard financial and precarious economic situation.
Reports indicate that Ukraine is at the mercy of the West, Russia and the International Monetary Fund for its monetary needs.
Russia wants Ukraine to be with it. Europe also wants the country and the fugitive president's earlier rejection of Europe caused his problems. The people have chosen to be with Europe.
Europe may be thinking it has won a battle against Russia. But Russia has not said it wants the people to leave it and be with Europe or that it is surrendering Ukraine along with the Russian speaking part of the country to Europe.
NEWS AND FEATURES
News & Features Around The World