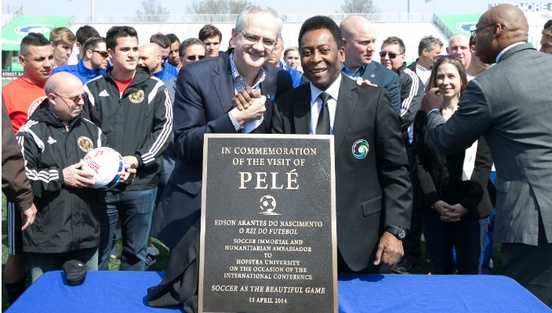 Edison Arantes Do Nascimento - Pele, at Hofstra University in April (Courtesy: www.hofstra.edu)
Everywhere you go or turn; at work or on the road or home, people ask you..."What team do you support in the World Cup and, what two teams are your favorite teams? And if you happen to be from a country that will play or vie for the round ball honor in Brazil, you become a toast.
"Nigeria!" People exclaim when they see you, because you are a Nigerian and your country's soccer team has placed the country on the world people like its Nollywood counterpart, which movies and the love people have for them has made a difference from so many woes that have besieged the country, like Brazil where the Samba football playing and bottom shaking dance will debut again on Thursday over the miseries that have caused protest that seem to have clouded the importance of soccer festival coming up in the country.
For the past two weeks, a negative type of Samba acceptable to philosophers as a way to show discontent has been playing in Brazil against the cost of hosting the soccer fiesta re think amid decay and lack of concern for human misery. Brazilians have been exercising the right to tell their government a need to change priorities. But that does not foreclose the beauty of the Brazilian Samba on the field of play and in the clubs. It is the countries national heritage, just like the country's mastery of soccer that has placed it on the world map.
Some news reports from Brazil have noted that the moment the country wins its first match against its opponent, the Samba will begin. The cause of the negative Samba on the street, the stench, the squalor, corruption and  government's lack of attention to development human capital will take the back seat. For when the Brazil's national team appears on the field, it would be unheralded. there will be paid choreographers and ensembles that have perfected sorts of Samba dances that will marvel and delight the world. Those layers that protesters think their time have passed and it is time to pay attention to teachers will realize the dancing skill of the players on the field will bring to memory the good old days of Soccer legend: Pele.
Pele! Pele!! Pele!!! Sweet Pele. He was at Hofstra University in April for a soccer conference that drew about 300 scholars, fans and journalists from 25 countries. More than 1000 people attended the honorary degree ceremony in honor of the soccer legend.
According the Hofstra University's provost, Herman A. Berliner, in his blog post, "Topics covered included “Picturing the Game: Soccer in Art,”  “Propaganda and Authoritarianism,” “Political Mobilization: Reform and Revolution,” “Philosophy of Football,” “Fan Cultures,” “Professionalism and Fanaticism in the Development of Modern Football,” “Populism, Politics and Football Clubs,” “Politics of the Mega Event,” and many more.  A significant highlight of the conference for everyone was the presenting of an honorary degree to Pelé whose soccer accomplishments and humanitarian efforts are legendary.  The reaction across all the groups present, clearly demonstrate that Pelé is one of the major figures of the 20th century."
The good news is that the protests in Sao Poulo has waned, though there is fear it may rise again on Thursday, but truth is that no protest will mar the fiesta's Samba shows.
NEWS AND FEATURES
News & Features Around The World