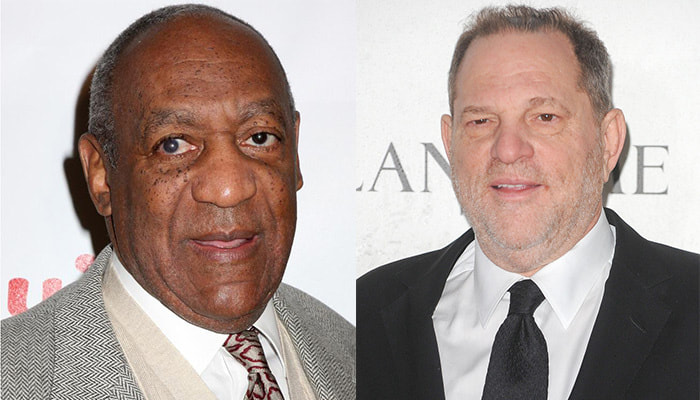 Bill Cocby - awaiting sentencing and Harvey Weinstein - was in court on Friday. Courtesy:BlackAmericaWeb)
Art/Life
Harvey Weinstein needs no introduction. He is as popular as the three star match brand;  a honcho among his peers in the Hollywood and in the film industry. Although, he is still famous, but for an unenviable reason!
On Friday, Weinstein was arraigned in a Manhattan Criminal court for alleged rape. An accusation that had been haunting him ever since some women said he got them against their approval. No one is certain yet about the likely outcome of the legal action against Weinstein, despite the number of women arrayed against him, concerning the ways the women said he loves to force them to surrender their fruit against their will.
And Weinstein's lawyer, Benjamen Brafman, has said that his client will come out a free man at the end of the litigation. However, with the application of hindsight, many observers are already saying that Weinstein is in for a long ride. They gave, as an example, how Billy Cosby show on the same route started and ended few weeks ago.
Aside from Cosby's case, many people believe that sexual misconduct hardly goes without a consequence. Some people are citing the case of Adam and Eve in the Garden of Eden about the fruit they ate and the consequence to the entire humanity. Some people are still arguing up to this moment that it could not have been ordinary fruit that Adam and Eve ate, because people said the scripture said that Adam said that the woman God gave him to be with him gave him the fruit to eat.
Of course, Eve blamed the snake for misleading her. Whatever makes the woman's anatomy so compelling and ravaging for the man that makes the man to just want a bite even at the expense of own life is what is beyond explanation. In some parts of the world, consensus is a strange word in sexual encounters, all the man needs to do is over power the woman, and the woman will rise and dust herself up after the encounter. And both man and woman will remain as lovers. Not so in the developed world.
Adam seemed to have told God that it was not his fault but that the woman caused it!  While Weinstein and other fellows in his world are talking about consensus affair and nor blaming anyone. Consensus or not, Cosby is down, his fame and everything in jeopardy, and awaiting sentencing. Both men still have large number of photographers trailing them just like they have been doing in their heydays.
Weinstein left the courtroom on Friday in handcuffs and an ankle bracelet. Cosby and Weinstein are artists with larger than life fame. The women who have brought the two men to public attention as living against the rule of sexual engagement in their country are women who have tread the same road like the two men - seeking to be famous as artists.
This is happening in real life, unlike what we read in Oedipus about a king, whose sexual misconduct for unintentional intercourse with his mother as a husband crashed his life's journey. Not everyone knew Weinstein before the accusations of sexual misconduct began to fly against him. Now he is known everywhere. But remember we are innocent until proven guilty.
Comment Box is loading comments...
NEWS AND FEATURES
News & Features Around The World