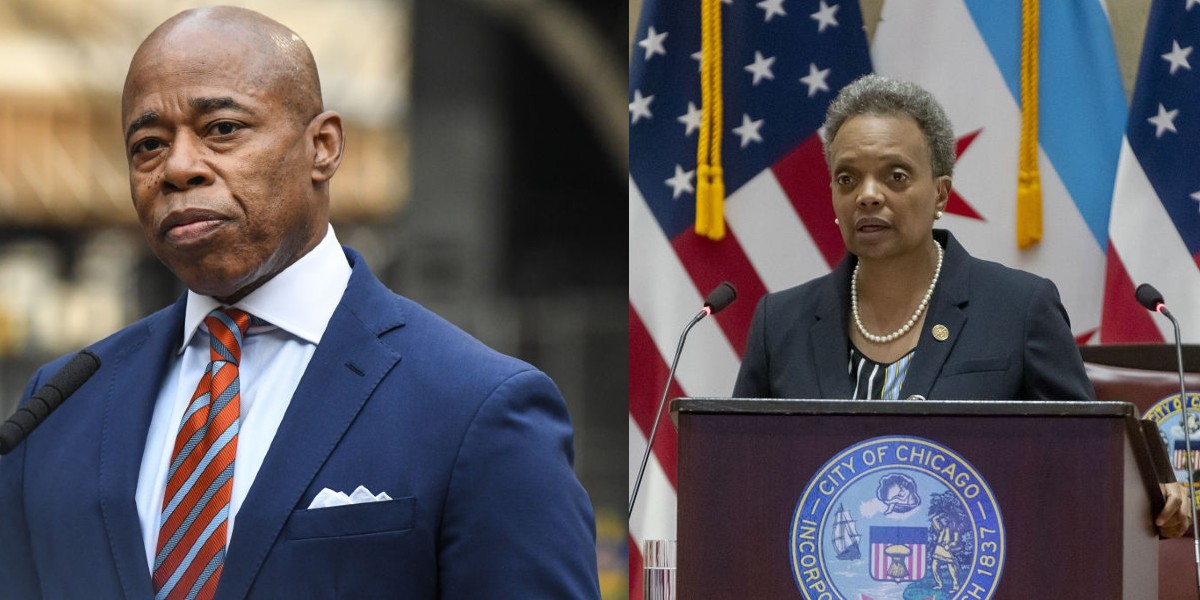 Mayor Eric Adams of New York and Mayor Lori Lightfoot of Chicago. Photo (Courtesy: NBC Chicago)
One female student at the University of California, Los Angeles, UCLA, was stabbed to death by yet an unknown assailant. Also in New York, a female cashier was shot to death by a gunman after she had surrendered the money demanded by the killer. Another victim pushed to her end in the subway just last weekend. These incidences represent the picture of some American big city's crimes amid a surge in criminality.
Polls statistics have shown that crimes have increased beyond expectations in major American cities like New York, Los Angeles, and Chicago. Therefore, public safety has become a number one issue confronting the government in the cities.
Mayor Eric Adams of New York is working on a thin line between ensuring public protection and adhering to dictates of a Liberal community towards righting the wrong caused by his predecessor. On the other hand, Chicago's mayor, Lori Lightfoot, said business owners need to do more to employ private security guards. Adams is worried that crimes in the subway have gone beyond comprehension. He felt unsafe the first time he visited the subway as mayor. But Lightfoot lacks the knowledge that unarmed security guards cannot handle the type of crimes in her city.
However, criminals overrunning cities is not a new phenomenon. What is lacking is adequate management. Philosophers Socrates and Adeimantus have warned the society in the Republic about the nature of cities and how to manage them when they become big. For example, New York had a history of crime surge that was corrected and achieved safety.
The development of policing against criminals follows the philosophical rendition in Plato's Republic. The shocking emergence against this is the idea that society can withhold money from public safety. A rise in the number of district attorneys who would not prosecute certain criminals confounds the situation.
No one will create a police department to protect society if no criminals endanger. People feel comfortable when they know they are safe in their homes and on the street. And the primary reason government spends a large share of taxpayers' money on public safety. The problem militating against security on the road is the emergence of politicians who want to defund the police and district attorneys who would not prosecute certain offenders.
One question is whether these newly elected politicians promise not to defund the police and district attorneys promise the public not to prosecute certain offenders during electioneering. The promise by politicians to and not do certain things if voted into office represent a pact of agreement between them and the electorate.
Politicians represent the electorates. They should not begin to do what they have no agreement with the voters. Democracy is about power delegated by the people. Politicians tend to change the meaning of democracy when they assume control, making the people think about what to do with wayward politicians.
Observers say reliance on voting out bad politicians who either fail to fulfill promises or force their agenda on the populace despite the repercussions is a way to handle an issue that threatens the society from politicians' dangerous moves aside from people asking questions.
Asking questions keep the matter in the heart of the people awaiting elections. However, some of these politicians are sure of reelection because their party controls the areas of their jurisdiction. And efforts to vote them out do fail. However, with crimes enveloping as they are in the cities, the people may have their ways to vote out bad politicians they don't want towards public safety.
Comment Form is loading comments...
NEWS AND FEATURES
News & Features Around The World