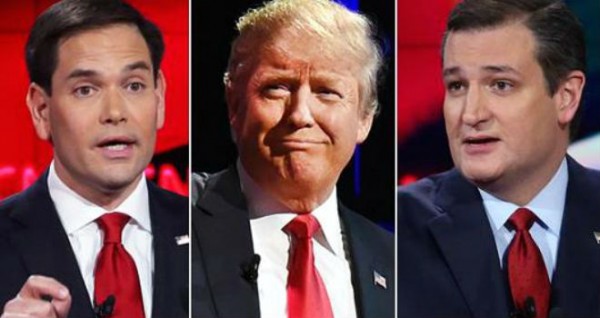 Marco Rubio, Donald Trump and Ted Cruz (Courtesy:Outsidethe beltway.com)
Ted Cruz, one of the presidential candidates, who lost in the Republican Party's primary election, congratulated Donald Trump, the party's presidential nominee. on Wednesday.
But to the large audience in Cleveland venue of the party's convention, Cruz fell short of expectation, for not given Trump a clear endorsement.
Although, Cruz approved Trump's plan to build a wall between Mexico and the United States to control illegal immigration, his statement that voters should exercise their conscience to vote for the candidate of their choice attracted boos.
Analysts described Cruz as a sour loser, igniting the memory of the hard fought primary elections, and Cruz's plan that he could at the end of the day snatch victory from Trump through backdoor, relying on the party's establishment's disapproval of Trump's likely emergence as the party's nominee.
Up to the last minute before the convention, some groups were reportedly still planning to upstage Trump, while Cruz and John Kasich were in the news as candidates expected to seize whatever opportunity from the second balloting to take the nomination, while the true winner is deprived of his victory in the polls.
When it was announced that Cruz and Marco Rubio, the two contestants, who were believed to have been instruments in the hands of Trump adversaries during the primaries would be speaking at the convention, many observers hailed the party's effort at coming together. Some observers said it may have been part of Trump's effort to unite the party toward the general elections.
But why would anyone expect a clear endorsement of the winner from a candidate who have lost the election? Why did not the Trump Campaign ensure it sees the Cruz speech for approval before allowing to speak? Reports say that Trump Campaign saw the speech, but approved Cruz to speak as part of the healing process.
But some observers are saying the best way to properly unite the party and bury the fierce disagreement of the primary season, should have been a clear endorsement of Trump by Cruz. Rubio was not physically at the convention, but he spoke through Satellite. Below is part of Rubio's speech as reported by Fox News Latino.
'It was short, barely more than a couple of minutes via satellite, but Florida Sen. Marco Rubio emphatically denounced Hillary Clinton as untrustworthy and unfit to lead the United States.Then Rubio, who exchanged nasty barbs with Donald Trump during the GOP primaries, urged voters in his speech to delegates at the Republican National Convention in Cleveland to vote for the real estate mogul.'
What would have been the news reports, had Cruz not appeared at the convention and Rubio did not speak at all? Would not it have been that the party has been fractured? So the appearance of Cruz with a congratulatory remark and Rubio's speech through satellite asking voters to line behind Trump is a sign of gradual healing and good for Trump.
Now Cruz is no longer against Trump, but Trump's supporters. What Cruz had failed to note was that the media generally expected a clear endorsement of Trump by Cruz. Therefore, the anger against Cruz's shortcoming cuts across the media and Trump's supporters.