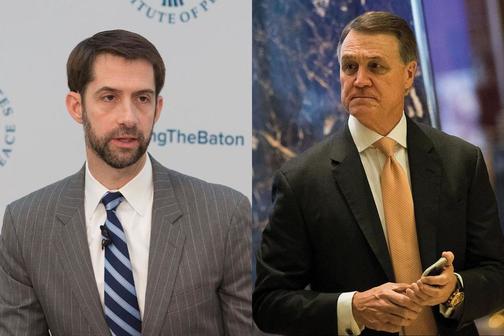 Senators Tom Cotton and David Perdue, proponents of a bill to curb legal migration into the United States
I am a supporter of curbing illegal migration for management reasons that are not political. I will not support any decision to stop others, who want to come into the country legally, and who are unaffected by the temporary ban to keep the country safe.
​     I believe that anything legal that does not contravene any acceptable law is a right that should not be taken away under any guise.
The proposed bill by two members of the United States' Congress, Senators David Perdue and Tom Cotton, to cut legal migration into the country by half is the opposite of the campaign promise by President Donald Trump to curb illegal migration.
​    Though, there is a loud criticism by the opposition against curbing illegal migration, fulfilling the idea as promised during the campaigns by building a wall on the Southern border can hardly be faulted, but to add curbing legal migration will make the liberals say they have said so, and that the plan of this administration is to keep certain people away from the United States.
And is already being said. It is catching on like bush fire in dry season. It is the major discussion among immigrants. The discussion about the proposed bill is not without uncertainty about their future in the U.S. And many people who don't know are saying it is the handiwork of the administration, unaware that the bill is a proposal by two senators and that the administration has merely given its support. Questions are being asked about how any sane person will graduate immigrants to be allowed into the country on age, education or ability to speak English and take care of his or her needs.
The fact that the administration has supported the idea raises a question about how the administration intends to enjoy the support of immigrants, when immigrants are being told that what rightly belongs to them may be taken away. It makes the Trump administration trying to play the role of God and alienating a core voting group.
However, discerned people believe that it is not yet late for the administration to pull its support for the proposed bill, which curious observers say is targeted to create more problems for the administration that is still struggling to sell its real programs that are not imposition from likely political enemies who pose as political friends and whose intention may not be short from dragging an already ugly situation spiraling into total mess.
The administration is still fighting its ban on certain people from some countries to keep the country safe from terrorism. It is yet to completely win that fight. The tax reform effort is still stalled. How then does it wants curious observers to view its support for a dead on arrival idea on curbing legal migration. People are talking about the idea as another step to a wrong direction.
The administration is still struggling to push the health care bill to replace sick Obamacare and some of its own ruling party members acting as destroyers. Still one of the same party members has floated a dangerous kite on curbing legal migration, and the president has embraced the dangerous idea.
Undoubtedly, Trump needs friends and support, given the mammoth opposition from the liberals, he still needs to be circumspect in accepting ideas from his party members, whose commitment to his success can not be fully trusted, probably arising from their hard fought campaign and still requiring longer healing period.
All that this administration should concern itself is lowering the number of illegal migrants, keeping dangerous migrants away and enhancing availability of employment for people to get jobs. Enhance learning of English for non-English migrants. Never use poverty as a reason to deny anyone eligibility, but ensure government assistance is reduced by ensuring  easy access to availability of jobs.
Comment Box is loading comments...
NEWS AND FEATURES
News & Features Around The World