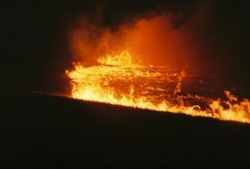 One person died, 1000 people evacuated and 20 homes and other buildings razed in a deadly fire in Guthrie, Central Oklahoma, United States. The fire is reported to have started on Sunday afternoon, and it is being helped by a powerful wind that has  made it difficult bringing the fire under control.
The one person who has died from the fire is said to have refused evacuating his home when asked to leave. Many who have been evacuated are imagining what will become their home and whether they will ever have a home to return. The incidence of the powerful wind with the fire is said to be making effort to control the fire difficult.
According to a report in Koco.com, the fire is 75 percent contained with 150 homes in the danger of the fire's current path. Guthrie Fire Chief, Eric Harlow said that a controlled burn that got out of hand caused destruction of six occupied homes. Consequently, several residents and firefighters were overcame by smoke.
The fire reportedly began with grass burning about 4pm on Sunday.
NEWS AND FEATURES
News & Features Around The World