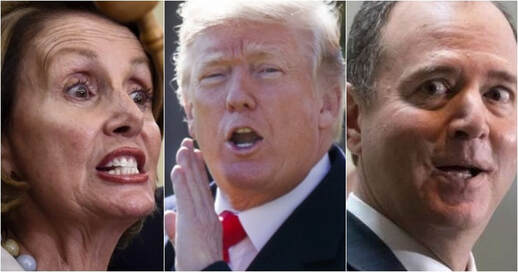 Nancy Pelosi, president Donald Trump and Adams Schiff
The Democrats are not removing President Donald Trump from office. They know that the party has no power to remove the president from office based on the process that there must be a trial at the senate. The Democrats hold the majority power in the House, and the Republicans hold the majority in the senate. For the president to be removed, the Democrats would need to flip about 17 Republicans in the senate against the president.  No one in his senses should think this is possible.
Alternatively, the Democrats are working to tarnish the president to ensure his drive to win reelection goes out of the window. All their efforts are concentrated on tarnishing the president with an impeachment without a plan about how the party could win the 2020 election. Rather than having a plan, they are holding on to having Joe Biden as their candidate with the Ukrainian allegation of Biden's son earning of $50,000 a month unresolved. Outside Biden, all they have is a parade of socialists.
They seem to understand the danger they are running into with the party's  parade of Socialist, and that has forced them to embrace the arrival of Mike Bloomberg in their mist. We all know that Bloomberg has no record to defeat Trump in an election. Rudy Giuliani was the most popular New York mayor, he found that running for president was a different ball game in comparison to running for the office of mayor. Unexpectedly again, Bloomberg is not welcome by the socialist hawks in the party who have all thrown their support behind Bernie Sanders.
Biden is a roast for the Republicans with the Ukrainian fraud hanging on his neck. It is an important issue that the democrats ought to be looking into how to handle from this moment. Unfortunately, they are not. They believe that impeachment of the president is all they need to win the 2020 election. They are like a perk of lazy people who instead of working hard to achieve an objective prefer  to travel the easiest route. It is not that the Republicans are angels, but they seem more heeled to have Trump elected based on the president's strength and hard work.
The president may have had his own mistakes like every other imperfect human being, but he is pushing hard to fulfill his promises to the electorate. The democrats don't have to like him. He has his own base and the party on whose platform he became president is fully consolidated in his support. The impeachment that the Democrats has going for them has been messed up by lack of transparency and partisanship.
How on earth do you impeach a president in the U.S. with a gross abuse of the process shown on the television for all to see and think you are on your feet? The economy is doing well, there is no terror attack and the country is peaceful. What else do anybody want that is not available here? And the president is working hard to repair the broken immigration policy!
Comment Form is loading comments...
NEWS AND FEATURES
News & Features Around The World