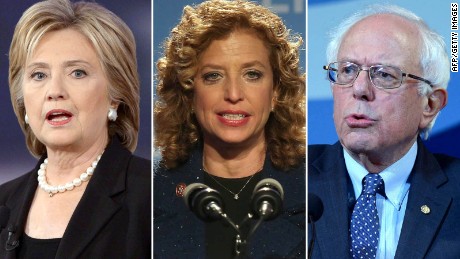 Hillary Clinton, Debbie Wassermann Schultz and Bernie Sanders
Democrats are busy in Philadelphia telling voters that Hillary Clinton is fit and ready for president, to use President Barack Obama's remarks.
In their bid, they seem to forget the need to use the truth to put out the fire that has engulfed the party from the Clinton's email server fiasco and the Democratic party's reported undemocratic application that has reliably put Bernie Sanders under the bus.
Blaming Russia and saying that Russia has hacked the party's emails,  gives it to Wikileaks with an aim to help Donald Trump, is not only being viewed as childish in outlook by observers, but also the most outlandish way to handle ethical issues.
. What members of the public want to know is whether it is true or false that the party's establishment has favored Clinton against Sander in the party's primary elections. Sanders has tried to put the matter behind him, but his supporters are still angry. He has tried to quieten them, but he has been unsuccessful.
One question that the reported questionable application in the Democratic Party's primary election has raised is beyond the Democratic party, because people are talking in term of the possibility that if the Democratic Party's primary election has been a sham, how can people be sure that the entire United States Democratic elections are not. The party's chairman, Debbie Wassermann Schultz reportedly resigned and the Clinton campaign has sidelined her from speaking at the convention, to save the campaign from the embarrassment of the claim that the primary election was a sham.
People are saying that it is not the source of the information that said the election was a sham that matters, but the truth or otherwise of the information. Although, various speakers at the ongoing convention of the party fine tuned their speeches to praising Clinton, while they put developments over the closure of her personal email server and the truth or otherwise of the matter of having helped Clinton to beat Sanders behind them, the matters are still alive in the public domain.
When Clinton lost the primary election in 2008, she had only Obama as an obstacle. But in this election that she has become the party's nominee, she has herself from issues arising from her email server as the first obstacle; the issue arising from allegation that the party had favored her in the primaries as her second obstacle and her major opposition candidate, Trump. is only standing as her third obstacle, using public knowledge of the first two obstacles and other policy issues to push against Clinton.
People are saying that Sanders may have chosen to act like a puppy dog, unlike Ted Cruz in the Cruz case of refusing Trump an endorsement, but that it will require the Clinton Campaign to address the truth or otherwise of the email information issue. Many people are already talking about an end of the Clinton run for president in the way the primary election sham has been handled, and with the party's acting chair, Donna Brazile saying that more information about the hacked information may be coming from Wikileaks.
Speeches against Trump as a dangerous person, as a conman, without proof, will not help Clinton and the Democratic Party, in the face of pushing serious ethical issues under the carpet. Undoubtedly, President Obama has credibility, but to transfer the presidential baton to a candidate of his choice will also require that the candidate of his choice has untainted credibility.
Just barring Wassermann from the party's convention is not the solution, despite its resignation as confirmation of the destructive fire within. The fire within the party has led to more destructive protests at its convention than the protests  at the Republican party's convention. Clinton will on Thursday night accept her party's nomination amid unresolved crisis and accusation of election sham.