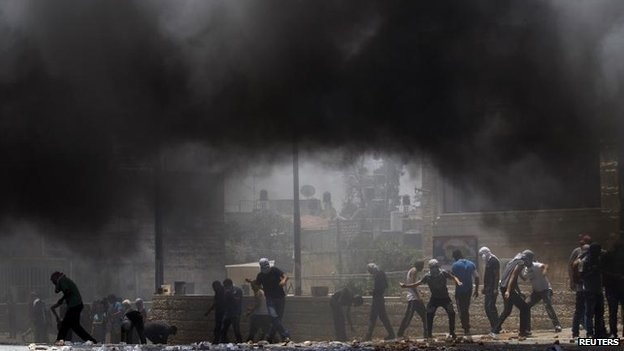 Violence in East Jerusalem after the body of the Palestinian teen is found
Three Israeli young men are announced missing. Few days later their dead bodies are found. No one knows who may have kidnapped and have killed them.
The Israelis authorities express believe the teens may have been victims of political assassination in the hands Palestinian neighbors.
Then, few day later a lone Palestinian teen is reportedly kidnapped in daylight and the body is found, dead and roasted. People who have seen the Palestinian kid kidnapped describe how he has been stopped on the street by two men who have faked seeking assistance for a direction. As the kid tries to help, a car comes near and he is forced and bundled into the car. He fails to return alive.
The three Israeli teens have been buried amid accusations of what may have befallen them and who may likely have been their assailants.
The same scenario is being repeated in the case of the Palestinian teen. And the day of his funeral will as well be made a scene of accusation and finger pointing to the other side.
What is manifestly clear is the deception by the two  leaders in the imbroglio that has turned innocent teens into victims of senseless political vendetta.
As the news of the Palestinian teen's disappearance and death become public, Mahmud Abbas calls on the Israeli leader, Benjamen Netanyahu to condemn the act the same way that he has condemned the disappearance and death of the Israeli teens.
And Netanyahu proclaims the act of the abduction and killing of the Palestinian teen as despicable, vowing to ensure justice, asking people not to take the law into their own hands, because Israel is a law abiding state. Although he has himself earlier vowed to deal with the Hamas for the death of the Israeli teens.
In the same manner, Abbas demanded that the Israeli government punishes the Palestinian teen killer if Israel wants peace between Palestinian and Israel. But the Palestinians authorities are yet to do the same it is asking the Israelis authorities to do.
It is characteristic of the lifestyle in the region. The possibility is real that no one will be arrested and punished for the killings in either side of the divide. It makes one to want to ask about the type of rule of law that Netanyahu is claiming for his country. The teens are purely victims of the long standing feud between the Israelis and the Palestinians. It is about a life dependent on sword and fight and age-old rivalry between two people. To teens in the region, it is life's misfortune of an endless revenge.
Click to set custom HTML
Widget is loading comments...
NEWS AND FEATURES
News & Features Around The World