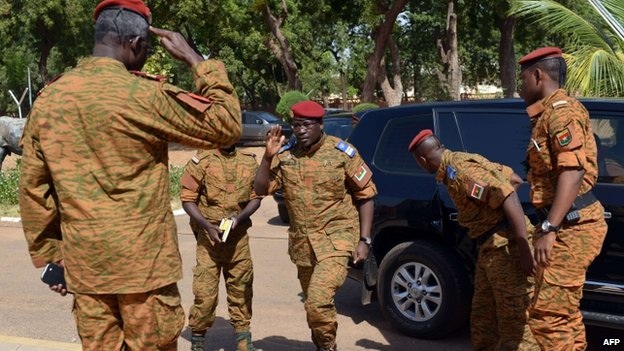 Zida's new stature (Courtesy: bbc.com)
Three African presidents, Goodluck Jonathan of Nigeria,  John Dramani Mahama of Ghana and  Macky Sall of Senegal will be visiting Burkina Faso from Wednesday, to parley with Col. Silva Zidanover untidy political development in that country.
Zida  has already stepped up his own diplomacy toward keeping what he has from the unrest following Campaore's ouster by the people. He has met diplomats in the country and he said the military does not like power, but that the military is in power to help the country.
He has also met with representatives of the opposition in the country in what he said was a way to find solution to political deadlock the military emergence in power had caused.
Some people have said it is the usual reason the military always give whenever and wherever they seize power. Curious observers say it will take some time to get Zida and his henchmen in Quagadougou to return power to the civilians.
Before the African heads of states who are visiting Quagadougou embark on their journey, the African Union has given the military in Burkina Faso two weeks to quit of face sanctions. Observers have said the AU threat of sanction was what a mere threat which they have no wherewithal of enforcing.
The three presidents are visiting Burkina Faso on behalf of the AU before the expiration of AU's two weeks ultimatum speaks volume on how not to conduct diplomacy. Observers say it is clear that Zida is already holding courts rather than quitting.
Before Friday's sudden change in Burkina Faso,  Zida was second in command of the presidential guard. His fortune has changed. Formerly, he has no one waiting to open his doors for him with officers waiting in attention to receive him. See the picture and his new stature.
NEWS AND FEATURES
News & Features Around The World