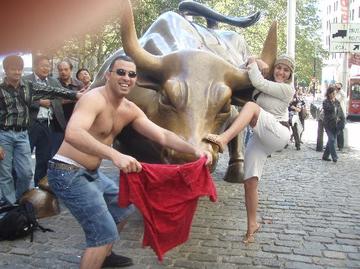 The Bull in the Financial District at Downtown Manhattan
It is most popular as the nation's financial district. But Downtown Manhattan has proved again and again that the place is much more than a financial district.
A place known for money market and attraction centers of note like the place where George Washington first took office in early days is fasting gaining notoriety for public demonstration
Remember the Wall Street and Zuccotti Park and the protests that was held at the park known as Occupy Wall Street? Something of the type that happened in Zuccotti Park is currently in major areas around Downtown close to the world Trade.
People are saying that  protesters, who have turned been occupying a small space between Murray Street and Vesey street in the last few days are quickly making people to think that the Downtown Manhattan may as well be seen as protesters' hub.
On Wednesday, many people who tried to access the Path Train through the Financial Center found the entrances to the World Financial Center locked. It is very rare for the World Financial Center to lock its doors against the public.  Although effort to get a words from the Center why the entrance were locked unfruitful, but many people said it was to lock away protesters from gaining entrance to vandalize the place.
"What are they protesting about?" People who have information say they are protesting about the companies in the area allowing some of their personnel to serve in government. But people wonder why anyone will see companies that have manpower and the intellectual from where government can draw resource as working against egalitarianism, which people say is the reason the protesters have turned the area into a free drama center, but not with the approval of the premises' owners.
Yes, the Downtown Manhattan is popular as financial district with the Bull and the World Trade Center attracting as many crowd as the Grand Central Station. Not many people seems to approve protesters now being referred as 'paid protesters' as part of a refined bargain in a democratic culture.
NEWS AND FEATURES
News & Features Around The World