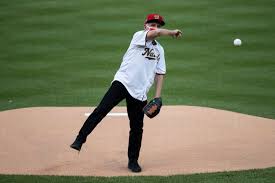 Dr. Anthony Fauci, head of the CDC, and the face of America's struggle against Covid-19, threw the first pitch when Major League Baseball returned  amid struggle with the pandemic on Thursday.
He threw the ball but he missed the target; so much that spectators watching the game on television around the country feared and prayed Dr. Fauci should not miss the target against the pandemic, the way he missed the first pitch for Baseball.
It is not a joke. Dr. Fauci's throw was wide and well off the mark. The reason for that is understandable. The doctor is not a professional baseball player, though he may be a diehard fan as he himself has said. How did the MLB decided on the doctor to throw the first pitch?
The MLB has not said anything on how the decision on Dr. Fauci was made for him to throw the first pitch. But people say it probably must be connected with the need to tie the doctor's presence at the stadium and throwing the first pitch to breaking Covid-19's jinx and the lockdown, and thus placing Baseball above the virus devastation.
Throwing the ball wide was not the only reason Dr. Fauci came into public attention at the stadium. He was also seen when his face mask was down from his nose and mouth, while he sat at the podium with other two fellows as lone spectators. The two other fellows had their face mask in place unlike Dr, Fauci.  There was no social distance  between the three, since they all had the mask.
The doctor explained that it was not that he did not use the face mask, but that he dropped the mask to allow him drink water because he felt dehydrated. And said that it was mischievous for anyone to say he did not use face mask,  reinforcing the discussion about the need to use the facemask. Couldn't the presence of Dr. Fauci with the other two, though as lone spectators, suggested that it was time spectators be allowed to watch the game at the stadium with at least social distancing and the use of mask?
Aside from Dr. Fauci's pictures at the stadium, there were also the players who slugged it out with Dr. Fauci and the other two fellows as lone spectators signalling the return of Baseball without the usual excitement of a huge crowd of fans to hail wonderful moves, goals and to hiss misses.
People say the absence of fans as spectators was an aberration and that it made the game appeared unnatural. Just as pleas emerged for people to watch Baseball without fans as the new normal, the MLB seems to have an answer towards erasing the continuity of an empty stadium with a game in full swing. It plans to introduce none human objects in the place of real spectators, while humans will have no choice than continue to watch on television.
There is a consensus among Baseball fans that the choice for spectators to watch games on television is a boost to various television stations. How this development of the return and watching the game on television will benefit  players and teams monetarily in the absence of ticketing is difficult to rationalize.
Some observers say people pay to access games on television, and that the MLB may have a way to draw from various television stations' income from games. It is believed that the return of the Major League Baseball amid the pandemic cannot be for the game or fun of it without ways for monetary compensation.

Couldn't the presence of Dr. Fauci with other two , though as lone spectators, suggests that it is time spectators be allowed with at least social distancing and the use of mask?