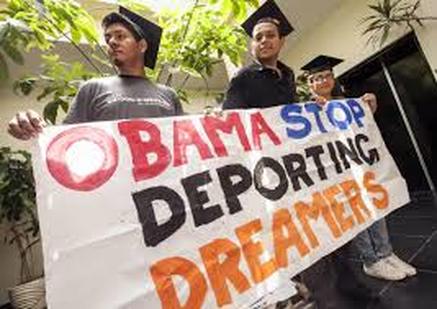 Obama's name placed on the picket line by protesters during his tenure
The report about the suspension of the Dream Act in the United States announced by Jeff Session on Tuesday was swift. It said that President Donald Trump has suspended the Dream Act.
Many people unaware about what the Dream Act means have trouble reading through the whole length of the report to grasp what it is all about, as a program young people brought into the country to remain pursuing their dreams.
One question that no one cares to ask or that has been gloated is whether the Dream Act as packaged and being executed is legal or illegal. If it is legal, why should it be suspended, and if it is illegal, is it moral to continue with it without finding a way to remove the illegal framing?
Another relevant question about the Dream Act is who is supposed to have worked and make it a law - legalizing it? News report said that the act has been in existence for 16 years. Then, about eight years ago or thereabout, President Barack Obama gave it longevity with a stamp of executive order.
What we have learned in news reports is that the Dream Act's status under an executive and not as a law passed by the Congress and signed into by the president is an albatross. The fault does not belong to the beneficiaries, but to the executive and the legislature. But for reasons of Trump's candor, a section of the media wants to make him a scapegoat for a fault that does not arise from his office, but of his predecessor.
As president, when you sign an executive order and aware that your executive order can be challenged in future and you the program to be here for a long time and give beneficiaries peace of mind, the responsibility becomes yours to work with  the legislature for the program to be passed into law and for you to sign it into law as president.
Failure to do that has brought the Dream Act into this controversy. The current executive has said that it has not resorted into asking a court of law to decide the fate of the program to shield from being declared illegal and beneficiaries to face possibility of deportation. Instead, the decision to temporarily suspend the program - with a six months window to enable the Congress put its acts together and do the work for which reason they are in Washington.
During the six months window, beneficiaries will be shielded from deportation, while the Congress is expected to close ranks and pass the program into law. But the section of the media knows the history of disagreement among the legislators concerning immigration and that passing the act into law will be like a camel passing through the needle's eye.
Therefore, the decision by the section of the media that are always anti-Trump to put the albatross on Trump's neck for the logjam that the program has run into. Despite Trump's words that if in six months, the legislature cannot fathom a bipartisan approach for the sake of beneficiaries of the  program, he would act on his own.
The Dream Act and the logjam is serious and needs to be resolved for the sake of beneficiaries, else they will become victims of politicians' wranglings and inability to forsake their differences for the common good. Politicians' inability to unite for a common good will not be a reason to allow illegality in any environment.
Of course, the dreamers also protested against deportation Obama's name on picket line, but instead of asking the legislature to do the necessary, he resorted to the executive order - a temporary solution. Perhaps, because of the feud between his office and Republican members of the Congress.
The feud has not ended. Trump's feud with the Democrats is alive. If the congress fails to agree on this issue, the dreamers' future is ta stake. And may be trump will use his own executive order to keep the dream alive and use it as political capital against his opponents.