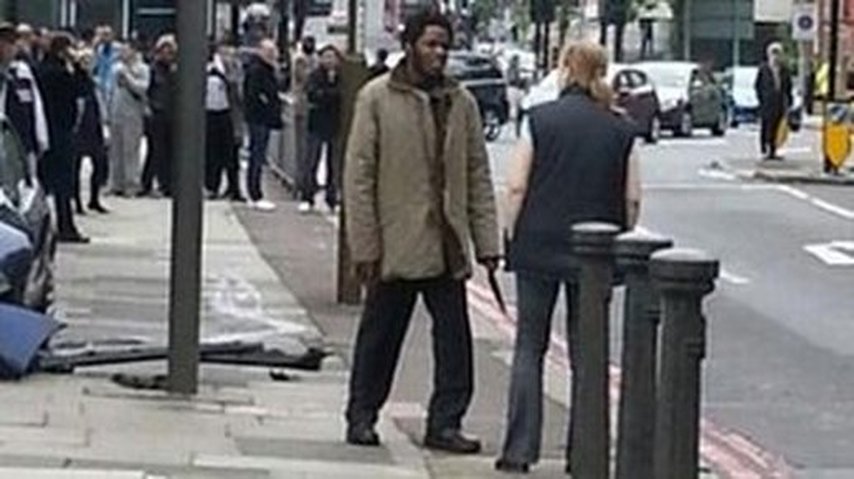 One of the attackers holding a knife
The British government had said that a victim of terror on a London street was a soldier who had fought in Afghanistan and named as Drummer Lee Rigby. He was reported to have been hit with a car before his assailants got out of their car and killed their victim, using a matchete and knives.
And the assailants Michael Adebolajo 28, and Michael Adebowale 22, (both Britons of Nigerian parentage) did not run away after they had killed their victim. They remained on the scene mouthing Islamic and political statements to a pocket of spectators.
"I apologise that women have had to witness this today, but in our land our women have to see the same. You people will never be safe. Remove your government, they don't care about you," one of the attackers was reported to have told spectators at the scene. One of them was shown on a television report saying, "An eye for eye and a tooth for a tooth," his hand soaked in blood.
The two men were later arrested with maximum force and they are in the hospital receiving under police watch treatment.
The public says this is a new dimension in terrorism, which has witnessed transformation from ordinary terror to Islamic fundamentalists attacking with guns and bombs and now to making life unsafe for soldiers walking in uniform on the streets.
Observers say one mystery remains unresolved. They said the man killed on a London street was not in uniform, and how the attackers knew him to be a soldier remained uncertain. It raises a question that If terrorists have resolved to monitor and attack a soldier in mufti, would soldiers in uniform be safe on the street?
Rigby's family has visited the scene of his murder and place flowers in his memory. Meanwhile the police in London have embarked on investigations and arrests of more people for questioning toward unraveling a crime that has been desribed as deprave and lacking explanation.
In another development, a military personnel was reported to have been attacked in Paris and linked to terror.