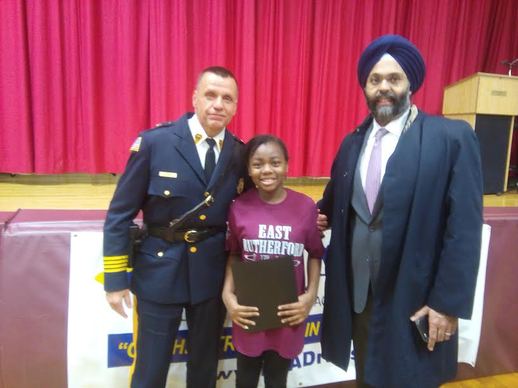 East Rutherford Police Chief Larry Minda, one of the graduating pupils, and Gurbir Grewal, Bergen County's chief law enforcement officer
It is Alfred Faust Intermediate Elementary School pupils' message to the world, during the school's L.E.A.D graduation ceremony on Tuesday, East Rutherford, New Jersey.
L.E.A.D's full meaning is 'Law Enforcement Against Drugs.'
The graduation crowned eight weeks of studies for the fifth graders, during which the borough's police department in conjunction with the Bergen County's prosecutor's office, taught them how to avoid road blocks, while they travel toward future endeavors.
"Drugs have many side effects. Don't do it!" One of the eight boys and girls, who spoke about their benefit from the L.E.A.D program, told the audience.
The East Rutherford Police Chief, Larry Minda, said that the pupils lives have begun a while ago. He observed that there is a need for precaution as they go forward, for them to avoid unnecessary road blocks in the future.
According to him, such roadblocks can be caused by choice of wrong friends and doing wrong things, which they may think is right, without a timely instruction, for them to know what is right and wrong.  He said that the program is targeted toward helping the young kids navigating the right direction, away from the wrong direction. The program is noted to have been in the public domain for about 30 years, helping children to choose the right path against involvement with bad friends, drugs and ending up, where their parents,the law enforcement and the prosecutors' office,don't want them.
The watch words for the children is for them to avoid alcohol, avoid drugs and not to allow road blocks, which addiction is capable of getting on their to way. According to the county's law enforcement officer, Gurbir Grewal, the major worry about crime in the county are drugs related, just as it is applicable to other parts of the State of New Jersey. He said that the county is fighting an epidemic of Heroin and Opium, and that it is true people are dying of overdose from these drugs. He revealed that about 100 people died of overdose in the last year, and he mentioned the negative effects, which involvement in such drugs is capable of doing to children's future.
Some of the pupils, reading from their essay on what they have benefited from the studies, say the though cigarette is legal, but that it still affects your brain and smile and tarnishes teeth. They echo the same voice regarding alcohol as capable of affecting emotion. One of the pupils said that her and her classmates have learned that heroin and marijuana are dangerous. In a nutshell, these young boys and girls have acquired the knowledge about the rule of law, its application, against lawlessness, possibility of time in jail and that no one who has served time in jail can be attractive to employers.
No weapon can be more effective than telling kids that kids who embrace drugs or criminality in anyway  have no chance of becoming mayor, lawmaker, prosecutor, police, chief executive officers etc, with the East Rutherford mayor, lawmakers and other police chiefs in attendance, as people who work together on daily basis to rid the borough of criminality and drugs addiction.
One parent said in an interview that it is good that the children are being informed about these dangers along their path early in life, for them to know that life is not about fantasy. And the children in their renditions about the eight weeks of studies said that they were taught about decision making, choice of profession, choosing friends and how to reject any offer that would not help their future, either by friends or peers.