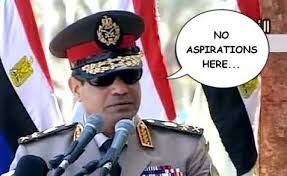 Field Marshall El-Sisi
Have you heard about the latest court judgment from Egypt? An Egyptian court has sentenced more than 600 people to death for protesting the military's sacking of Mohammed Morsi.
With more than 1000 killed with bullets on the streets during the riots, another one thousand plus have been placed on the waiting list for the hangman's noose.
By the time Egypt's new history shall be written incorporating Field Marshall Fattah El-Sisi's ascension, something worse than the Pharaoh's burdening of people with labor will emerge. People will read how more than 1000 people were killed on the streets and another more than 1000 sentenced to court by a court of law all in order to stop people from self expression. Right now, people are already asking which is worse: To burden people with labor and leave them to aspire to leave the land or to round people up and march them to the death chamber without option of another opportunity to live.
Although, there is a provision for appeal in the law, but with the photographs of relatives of those sentenced sprawling on the floor and crying for help, it is obvious the impact that will have in stilling fear on people against voicing their opinion on issues or criticizing the government.