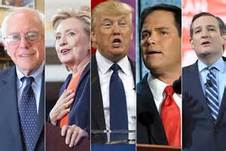 Hillary Clinton seems to be taking Bernie Sanders to the cleaners with victory in three states to her credit, while she is leading in one other state and Sanders leading Missouri. Likewise, two results from the Republican Party shows that Donald Trump has won the states of Florida, Illinois and North Carolina, while John Kasich has won Ohio.
The Republican opponents of Trump succeeded in taking Ohio away from him, but in Florida the effort to take the state away from Trump failed with Rubio having just 27 percent of the votes, Cruz 17 percent and Kasich 7 percent with 90 percent reporting.Report says that Rubio has ended his campaign.
In Missouri, Trump is having 42 percent to his closest rival's 39 percent with 9 percent of reporting. The race in Missouri is tight for both parties, but Sander is still leading with five points and Trump with one, with 53 and 53 percent reporting respectively. The race in Illinois between Clinton and Sanders is also tight. With 51 percent reporting, Clinton leads Sanders 52 - 47 percent each.
From all the results so far, Clinton appears to be surging ahead from Sanders' reach and almost with a clear path to nomination. It is left to be seen if Sanders can muster enough votes to stop her ride to nomination. Will Trump win Missouri to end the evening? We are all watching.
NEWS AND FEATURES
News & Features Around The World