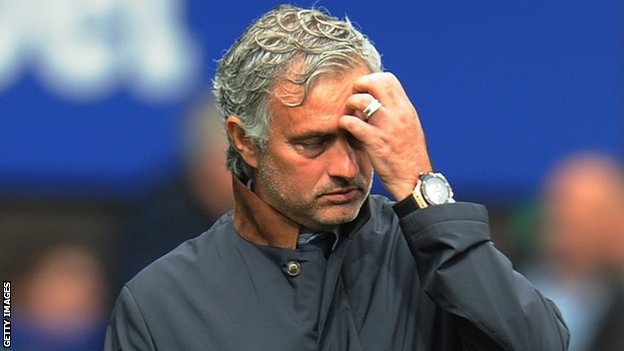 Jose Mourinho (Courtesy: bbc)
﻿   "Oh, no, Chelsea has lost again for the second time," remarked Breyan Godspeed, a New Yorker and an avowed supporter of the English First Division soccer team, as he scanned through match results on his cell-phone on Saturday.
Breyan references Chelsea's loss to Everton 1-3 at Goodison Park during the weekend. The second successive loss by the highly rated soccer team has its manager, Jose Mourinho, already talking about avoiding relegation.
An observer says when you don't gain promotion, you get relegated. It is what happened in any game, and not only in soccer. No team is invisible when it comes to surprises sports have to offer in competitions."
Obviously, discussions are now centered on what may likely be the fate of Chelsea, having lost four matches and 12 points, while its rivals have netted all the points they needed from same number of matches. Soccer pundits attribute Chelsea's undoing to the loss of heat by its defense.
Having lost four of its last seven Premier League matches, Chelsea faces the worst start of a season by a defending champion since Blackburn in 1996. However, despite the apparent failing of the team, supporters are still betting for a miracle for the team to pull through against the Manchester United and the Crystal Palace.
Many people think that the league is over for Chelsea, because unlike Chelsea, both Manchester United and City are comfortable with their respective positions on the table. Manchester has five victories from five encounters and 11 points in the bargain, and the city is expected to win its next match at the Crystal Palace.
For Chelsea to bounce back, the City has to lose its next four matches, and Chelsea has to begin winning its next four matches, a big job for Chelsea and Mourinho, who said he is smiling inside and not laughing, despite the sticky situation he has found himself first time in his career.
The manager is torn between blaming his players, which he said he cannot do as to be fair to the players he naturally adores, thinking about how to turn the table from losing to winning and thinking about what will happen in their next encounter, which he said is coming up in few days, unlike a long period between the last match and the one the team lost to Everton.


﻿
NEWS AND FEATURES
News & Features Around The World