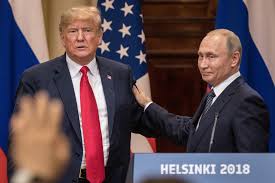 Christopher Wray of the F.B.I
The United States Federal Bureau of Investigations, F.B.I, had information that the Florida killer was capable of committing school mass murder, but failed to stop him!
A New York Times'﻿ report has revealed that the F.B.I received a tip last month about the impending school murder that claimed 17 lives in Florida, which the F.B.I acknowledged, but said it did nothing to stop it.
Consequently, Rick Scott, the Florida governor has called on the Christopher Wray, the head of the F.B.I, to resign.
"Seventeen innocent people are dead and acknowledging a mistake isn't going to cut it," Scott is quoted in the Times' report.
A short while after the Times' published its report about how the F.B.I failed to stop Nicolas Cruz's killing of innocent and defenseless children in Florida, a report about Special counsel Mueller's indictment of some Russians in the alleged interference in the 2016 presidential elections.
The report on Special Counsel Mueller's report is itself unclear, as there is nothing to show that those Russians were working in concert with any American with deliberate knowledge to conspire to make Donald Trump president. The report said that the Russians started their effort to interfere in the U.S. elections as far back as 2014.
Trump had quickly tweeted that he had not even begun his campaign for the U.S. president, when the Russians began their interference in the country's elections.
NEWS AND FEATURES
News & Features Around The World