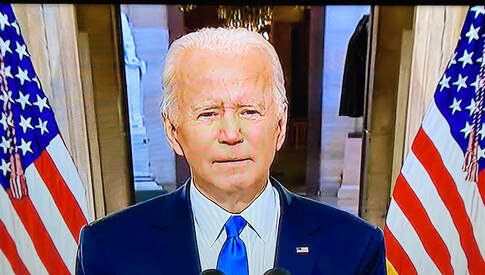 President Joseph Biden
The Democratic Party plans to change the public policy process in Congress to allow the passage of The Rights to Vote Act and John Lewis Rights to Vote Advancement Act to succeed is generating heated debate.
Questions arose on Tuesday as President Joseph Biden visited the State of Georgia, promoting both bills. They have passed in the House of Representatives but yet to pass in the Senate.
But the public policy process is stacked against the president's party plans because his party lacks the number of senators to ensure the passage of the bills. Consequently, the party schemes an end to the filibuster - a process that has been part of the public policy process in Congress for several years. The Republican Party is highly opposed to the end of the filibuster against the Democratic Party's plan.
The opposition party accuses the Democratic party of a scheme to have its way at all cost. It cites instances the Democratic Party members had opposed ending the filibuster when it favored its agenda. And now, the same party seeks to compete in the same process because it does not suit its plans.
The argument compels research on the filibuster. What is the filibuster? According to Wikipedia, the filibuster is a tactic employed by opponents of a proposed law to prevent the measure's final passage. The filibuster was accidentally introduced in 1806, ending a party's ability to complete a debate in the Senate by a simple majority.
The rules about the filibuster have changed several times. A senator could hold the Senate floor with a speech for several hours or a whole day and up to 24 hours without allowing discussions on a bill he opposes. Following a change, a senator who opposes a bill can write a letter expressing her opposition and stall the bill's passage.
Observers are saying ending the filibuster will be difficult for the Democratic Party to achieve. Observers say the party lacks the number of senators to complete such an essential process without opposition from its members. They advise the party to wait until it has enough senators in the majority before moving forward with its plan.
The party does not currently control such a majority number. It will possibly fail if it goes ahead and one or two of its senators vote against the plan and have no support from any of the Republican senators. One question arises about whether it is suitable for public officials to promote an agenda they are aware would not pass the Senate's policy process, wasting taxpayers' money?
A section of the media that supports the Republican Party and conservative agenda shows some Democratic Party's senator position, including the current majority leader Charles Schumer on the filibuster favoring its continuity and wonder why the same senators and their leader want the filibuster out of the way in 2022.
The Republican Party's senators have dreamed in the past of ending the filibuster attracting the Democratic Party members' opposition. Much about politicians and their unethical approaches to favor themselves against the public interest.
NEWS AND FEATURES
News & Features Around The World